World: US pledges to cover Russia’s gas supply to Europe 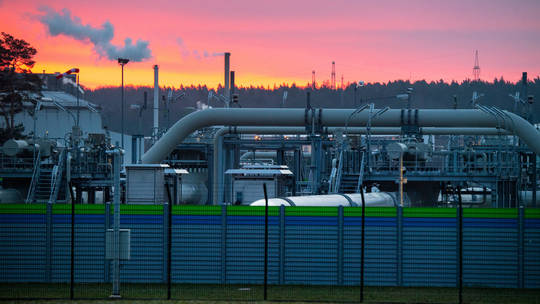 If the Russian supply of natural gas to the rest of Europe is cut off due to an escalation in Ukraine, America is fully committed to making up the shortfall with liquefied natural gas (LNG), US President Joe Biden said on Monday.

Speaking at a joint press conference with German Chancellor Olaf Scholz at the White House, Biden said that Washington was ready to fill the energy gap that could be left if Russian pipelines stopped supplying the commodity to its western neighbors.

“First of all, we are looking at opportunities to make up for lost gas from Russia. We’re underway of trying to see what we can do to do that and dealing with our friends around the world, as well. We think we could make up a significant portion of it that would be lost,” the American leader assured.

READ MORE: Washington: US reacts to partnership between Russia & China

The US President also warned Moscow against cutting the energy supply to other parts of Europe, and sought to remind the Kremlin that a significant part of its budget relies on the export of natural resources.

“But, you know, what everybody forgets here is Russia needs to be able to sell that gas and sell that oil,” he said. “If, in fact, it’s cut off, then they’re going to be hurt very badly as well. And it’s of consequence to them as well. This is not just a one-way street.”

The German chancellor confirmed his counterpart’s assurances, stating that the two had “prepared for all kinds of situations.” He also reiterated the European Union’s commitment to transitioning to renewable energy sources in the future.

The reassurance from Biden came in response to a question from a German journalist who expressed doubt over America’s commitment to ensure the EU’s energy security, calling it “an empty promise.” He also noted that American LNG is significantly more expensive and is available in lesser volumes than what might be needed to replace the Russian gas.

Scholz’s trip to the White House comes as Russia stands accused of placing more than 100,000 troops on the border with Ukraine, with some believing that this is a sign of an upcoming military incursion. This claim has repeatedly been denied by the Kremlin, and it has also been played down by Ukrainian President Volodymyr Zelensky, despite warnings from Washington that an invasion could begin at any time. In preparation, many Western nations have planned to impose sanctions on Moscow in case of any further escalation.

If war does begin, the US and some of its European allies have expressed fear that Moscow might cut off its energy supply as a response to new sanctions.

Russian President Vladimir Putin has stated on multiple occasions that the Kremlin does not use energy export as a political weapon. Speaking at the Russian Energy Week International Forum last year, Putin said that Moscow has always complied with its contractual obligations, “even during the most complicated Cold War periods.”