The project cost, amounting to $11.48 million, is being supported with a grant from the Bank Group’s concessional financing window. 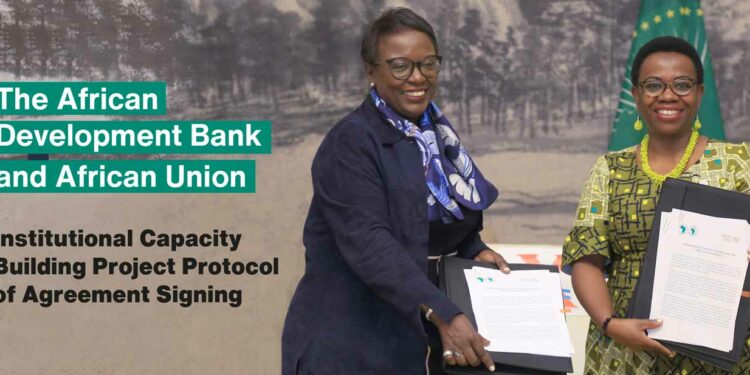 The project is expected to bolster the AU’s efforts to implement  Agenda 2063. Adopted in 2015,  Agenda 2063(link is external) is the African Union’s vision for an integrated, prosperous, and peaceful Africa driven by its own citizens and representing a dynamic force in the global arena.

The project cost, amounting to $11.48 million, is being supported with a grant from the Bank Group’s concessional financing window. It was approved by the Board of Directors in February 2022. The signing of the protocol of agreement signals the start of the implementation phase of the project.

Deputy Chair Nsanzabaganwa alluded to the process of consultation that led to the signing of the agreement. “As you know, this ceremony and the signing of the protocol of agreement represent the culmination of a series of interactions and consultations that have occurred between the African Union Commission, the African Development Bank, and several stakeholders starting last year,” she said.

The project will upgrade and automate several AU systems, including those for information management, procurement and financial management, human resources and results management. It will also address gaps in the AU’s continental early warning system, a critical instrument in the prevention and management of conflicts and fragility across the continent.

In her remarks, Bank Acting Vice President Fal said, “Today is a milestone. Reaching it would not have been possible without the mutual trust and collaboration that our respective institutions have shown historically and throughout the process.”

“Not only are Bank investments plugging regional infrastructure gaps, they are also strengthening the institutional capabilities of the AU, regional economic communities, the African Continental Free Trade Agreement Secretariat, and other regional mechanisms,” Fal said

READ MORE: Free movement of people should be reinforced in Africa to boost economic integration of the continent — African Union

Fal headed a Bank delegation to the signing ceremony. The delegation included Deputy Director General for the East Africa Region Abdul Kamara, and Acting Director of the Regional Integration Coordination Office Jean-Guy Afrika, among others.