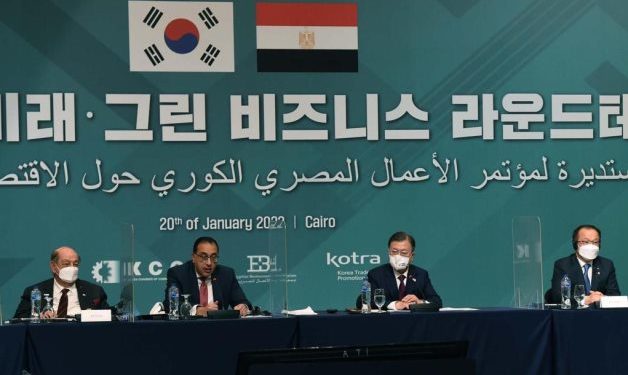 President Moon Jae-in said that economic cooperation with Egypt dates back to the 1970s so as now there are 33 companies operating in Egypt with investments worth $800 million. The president pointed out to the great interest of Egyptian consumers in South Korean vehicles, which reflects the active economic ties between both countries.

“All that is just the beginning as the Egyptian economy enjoys tremendous capabilities that qualify it to achieve progress and development. For instance, youth represent a large percentage of the population, and Egypt has a distinct geographical location and abundance in natural resources. Further, Egypt works on accomplishing its 2030 Vision on sustainable development,” President Moon Jae-in noted.

The South Korean president similarly pointed out that Egypt succeeded in attracting a large amount of foreign investments over the past five years, in spite of COVID-19 challenges. He added that Egypt would keep cooperating with South Korea to ensure attaining a bright future post-pandemic.

The president detailed three axes of Egyptian-Korean economic cooperation. The first is benefiting from each other’s regional trade agreements. The second is reinforcing green industries in Egypt, mainly electric cars and renewable energy. That is in addition to paving the way for Korean firms to implement environment-friendly infrastructure. The third is cooperation in the ICT sector, helping Egypt with executing its digitalization plans.

In his speech, the Egyptian prime minister commended the outstanding cooperation with South Korea at the beginning of the pandemic, as it granted Egypt consignments of medical equipment.

Madbouli pointed out that the current visit by the South Korean president, which is the first in 16 years, is the outcome of the development of bilateral ties and exchange of official visits. He added that he expects the visit by the South Korean chief of state to be the beginning of further cooperation on the trade, investment, technology transfer, and industry localization levels.

The prime minister noted that Egypt seeks to learn from the South Korean expertise in various fields, and experience over achieving development and growth, given that the South Korean example is one of the most successful worldwide.

Regarding economic relations, Madbouli highlighted that between January 2021 and November, joint trade rose by 53.5 percent recording $2.2 billion. As for South Korean investments in Egypt, their accumulated value hit $700 million and they are embodied in 181 enterprises.

The prime minister underscored, in that regard, that investments in Egypt benefit from the free trade agreements the country has with the European Union, the Arab World, and Africa. That is in addition to the Egyptian market, having 100 million consumers.

Madbouli underscored that Egypt aims for technology transfer from South Korea in the sectors of manufacturing and telecommunications among others. He added that Egypt hopes that South Korean factories operating in the country would rely further on local feeding industries.

The prime minister also said that Egypt aims for the diversification of its exports to South Korea so that non-petroleum products occupy a larger share. Madbouli concluded by showcasing that Egypt also contemplates benefiting from the South Korea’s experience on green economy in the sectors of energy, transport, water, agriculture, manufacturing, and waste recycling.

CEO of Hyundai Rotem LeeYong-bae said that the company has supplied Egypt with 484 metro railcars for the second and third lines. What’s more is that 320 others are being produced locally – in partnership with the National Egyptian Company Railway Industries Company (NERIC) – to be operated on the same lines.