Conference on Land Policy in Africa opens with calls for pro-poor land policies, equal access, and ownership of land

The 2021 Conference on Land Policy in Africa opened Monday with a resounding call for African countries to develop pro-poor land policies and inclusive land tenure rights, particularly for women and youth. 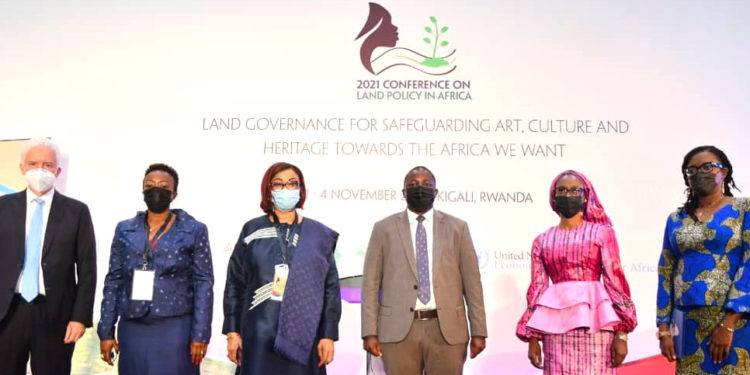 “We need commitment at the country and regional levels to ensure equity,” said Patrick Karera, Permanent Secretary at the Rwandan Ministry of Environment, on behalf of Environment Minister Jeanne d’Arc Mujawamariya. Karera told delegates at the hybrid event, held partially in Rwanda, that “anything related to land, needs strong political will, people buy-in, and close collaboration.”

He said the negative effects of climate change raised the risk of deforestation and land degradation, and called for innovative ways in the implementation of land reforms and services.

“Land remains a very emotive issue in Africa and continues to have major historical significance for the people. It lies at the center of their agriculture activities, natural resources and other land-based activities that are fundamental to their livelihoods as well as ensuring food security and social-economic development for future generations,” said Josefa Sacko, Commissioner for Agriculture, Rural Development, Sustainable Environment and Blue Economy of the African Union Commission.

She added that competition for land as a result of the negative effects of climate change was exacerbating conflict on the continent, as witnessed in the Sahel. She urged member states to develop comprehensive land policies to address the human, financial and technical capacity gaps in accordance with the African Union Framework and Guidelines on Land Policy in Africa.

Via a representative, Dr. Beth Dunford, African Development Bank Vice President for Agriculture, Human and Social Development, made a strong argument for equitable access, use, and ownership by all community members, particularly women and the youth.

Represented by Aissa Sarr Toure, Country Manager for Rwanda, Dunford said: “Land is a key input to food production and a major source of capital for the poor. In any program on land reform and women’s land rights in Africa, the importance of land and its unequal distribution between male and female should be given greater consideration.”

“We in the Bank are very resolute on this in our overall programming and project implementation. We shall continue supporting our member states in national visioning and the imperative for inclusive and sustainable development,” she added.

She added: “Traditional institutions and alternative dispute resolution mechanisms are being utilized, alongside statutory law, to address disputes. But more still needs to be done.”

Sharing his country’s experience on land challenges and the innovations required, Sakombi Molendo, Minister for Land Affairs, Democratic Republic of Congo, said: “We found out that 80% of cases before courts and tribunals were land-based. We initiated reforms to change this situation. In two years, we have been successful in drafting new land policies that would soon be tendered to the government for deliberation.”

The African Land Policy Centre, a collaborative project of the African Union Commission, the United Nations Economic Commission for Africa, and the African Development Bank, hosts the Conference on Land Policy in Africa every two years. The conference brings together African policymakers, academics, civil society leaders, and the private sector and international agencies to discuss the future of land policy in Africa.