Speaking to the Russian First Channel on Thursday, Sergey Lavrov suggested that right now Berlin doesn't have economic sovereignty and is at the mercy of third parties. 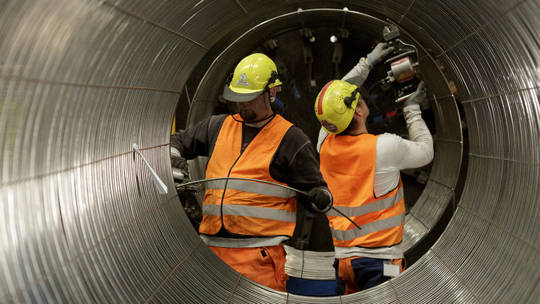 The ongoing saga with the Nord Stream 2 gas pipeline and its long wait for approval and certification shows that Germany has no freedom to pursue its own economic interests, Russia’s foreign minister has claimed.

“About Nord Stream 2, it’s no longer about freedom to choose alliances. It’s just freedom to carry out ordinary commercial activities on world markets,” he said. “It turns out there is no freedom for Germany to pursue its economic interests.”

The controversial Nord Stream 2 natural pas pipeline was completed in September but is yet to be certified. Approval of the project, which could have come this month, was suspended in mid-November by the German Federal Network Agency over a regulatory issue.

The system directly connects Russia to Germany, making the process less reliant on third-party countries. This could significantly lower the price of gas. However, the US and Ukraine have accused Nord Stream 2 of being a Russian political project rather than an economic endeavor, with Washington claiming that it threatens Europe’s “energy security.” The American government has sanctioned the pipeline on multiple occasions.

Moscow has repeatedly stressed that Nord Stream 2 is a commercial project in partnership with Europe and has accused the US of cynically trying to stop the pipeline so it can sell liquefied natural gas (LNG) to the continent.

Earlier this week, US Undersecretary of State for Political Affairs Victoria Nuland admitted that Washington was doing its best to halt certification of the project.

“What we are doing now is working with the Germans, working with the EU to slow their consideration of the implementation of the pipeline,” she said. “This German government has taken significant steps to do that, and they’ve also reconfirmed the agreement we had with the previous government with regard to what happens to Nord Stream 2 – namely, it’s suspended if Russia aggresses against Ukraine.”