Let’s push the African Continental Free Trade Area as a sure-fire way to a golden “made in Africa” label, leaders say at Intra-African Trade Fair

That history repeats itself need not be a bad thing in Africa, South African President Cyril Ramaphosa stressed during the opening ceremony of the second Intra-African Trade Fair in Durban, South Africa. 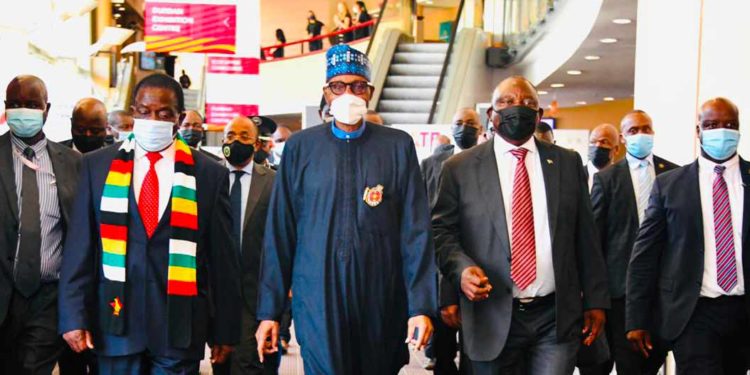 Speaking on Monday, the president recalled that for centuries in pre-colonial times, Africa was a thriving trade hub. Now the continent is “taking concrete steps to write its own economic success story.”

“I think many of us long to see that wonderful and golden label — ‘made in Africa’– not made anywhere else in the world. This is critical if we are to change the distorted trade relationship that exists between African countries and the rest of the world,” Ramaphosa told the audience in Durban, home to one of the busiest harbors in Africa.

The biennial Intra-African Trade Fair was launched in 2018 to be a springboard for the African Continental Free Trade Area (AfCFTA). Organized by the African Export-Import Bank (Afreximbank) in collaboration with the African Union (AU) and the AfCFTA Secretariat, the Fair brings together development, trade and investment communities to negotiate deals and agree on the steps required to promote intra-regional trade.

The AfCTA, which became effective this year, aims to become the world’s largest trade zone since the World Trade Organization in 1994, with the potential to boost African incomes by billions of dollars in the next decade. Speakers at the Trade Fair said such promise was especially relevant as the continent tries to rebuild in the wake of the Covid-19 pandemic.

Citing successful deals from the maiden Trade Fair, Afreximbank CEO Benedict Oramah dismissed skepticism about African countries’ ability to significantly boost trade among themselves, which currently stands at around 18% of total goods that cross national borders.

Oramah said Afreximbank was 100% behind Africa’s trade pact. “This fair is a starting point. The other reasons why they are wrong: Today, we have a strong and dynamic AfCFTA secretariat with knowledge and energy to drive the AfCFTA agenda.”

The 2018 Trade Fair delivered deals worth about $32 billion, of which around $25 billion had been implemented and another $2.5 billion are being processed. Its offshoots include a young Nigerian entrepreneur who now produces drones for agricultural use in Singapore, a major solar power scheme roll-out by an Egyptian company in South Sudan, and a 2,100 MW hydroelectric project in Tanzania, fully funded by African banks.

The 2021 Trade Fair is expected to produce deals worth about $40 billion. Future events will feature an auto show as part of a larger strategy to capitalize on the industrialization potential of the sector. Oramah pointed out that the average vehicle boasts over 30,000 components, creating room for industries such as rubber in Nigeria, Cameroon and Côte d’Ivoire, not to mention petrochemicals.

Wamkele Mene, Secretary General of the AfCFTA secretariat, said the pact would not succeed without the private sector, small and medium enterprises, and young entrepreneurs. Citing the case of the European Union, he said the journey to market integration was difficult and took time.

“The African Development Bank Group is a staunch supporter of the African Continental Free Trade Area. Especially now, as we build back better from the Covid-19 pandemic, the need to boost intra-regional trade has never been greater,” Adesina said in a video message. “Together, there is no limit to what we can achieve.”