The dam's construction has provided employment to more than 1,350 locals at a time when the COVID-19 pandemic has pushed millions of Kenyans out of gainful employment. 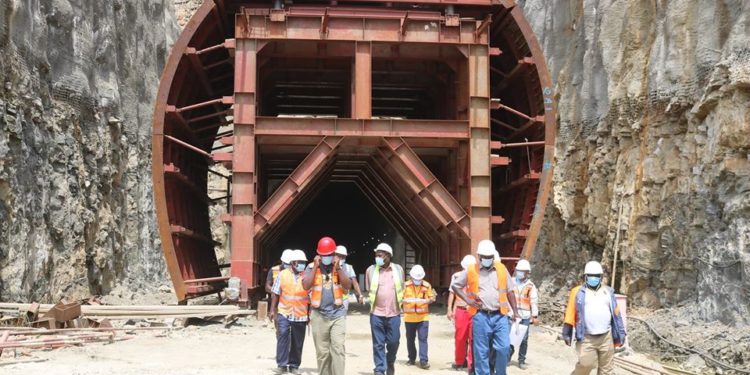 On the last day of December, engineers involved in construction of the Thwake multipurpose dam on the Athi River in Kenya successfully managed to divert the river’s waters into the dam’s two mega tunnels. The event marked a milestone in implementation of the dam, which is jointly financed by the government of Kenya and the African Development Bank.

Upon completion, the project, being constructed by China Gezhouba Group Co, will supply 150,000 cubic meters of clean and safe drinking water each day to more than 3 million rural residents in the counties of Makueni, Kitui and Machakos. The dam is also expected to provide up to 20 megawatts of electricity to the national grid and promote irrigated agriculture. All of this speaks to the government’s Vision 2030 development blueprint.

The skills and technology transfers that are benefiting local employees will also serve Kenya in similar undertakings in the future.

China Gezhouba Group has also extended the hand of corporate social responsibility to the host community, upgrading roads and building learning facilities in the area’s schools.

Kenya aims to cement its digital ambitions with Konza becoming the first smart city in the region. The tech hub is envisaged to be a key economic driver for Kenya, with more than $800 million already committed to the project. Konza will largely draw its power and water supply from Thwake Dam.

Extended periods of drought have resulted in severe water and food security problems in eastern Kenya. According to United Nations data, more than 2.9 million people in that part of Kenya are currently in need of food aid, with malnutrition affecting up to 500,000 children.

As a sustainable response to dried wells, lost pastures and dead livestock, the government intends to devote more than 40,000 hectares of land to irrigated agriculture via Thwake Dam. This will promote not just food security, but also wealth creation through light industries and value-added agricultural produce in line with the aspirations of the government’s Big Four development agenda.

Thwake Dam, which is expected to be completed by June, once again brings to the fore the utility of Kenya-China cooperation in the infrastructure area. Chinese companies have gained visibility in the country as a result of their efficiency, affordability and timelines in completing construction projects.

While many construction projects undertaken by Chinese companies are in the roads and railway sector, China Gezhouba Group is drawing attention to the potential of Kenya-China ties in the water sector. The competitiveness of Chinese enterprises is also earning the trust of multilateral institutions such as the African Development Bank, which is providing 42 billion Kenyan shillings ($370 million) in funding for the dam’s construction.

At 1.5 kilometers long and a designed height of 82 meters－an estimated capacity of about 12 million cubic meters of water－Thwake Dam will be the largest water conservation and hydropower project to be undertaken by the government of Kenya. It is also a highlight of the projects implemented under the Belt and Road Initiative.