The national carrier says one company has already accepted to take a plane that hasn’t been in use, even as the management refers to the discussions as difficult. 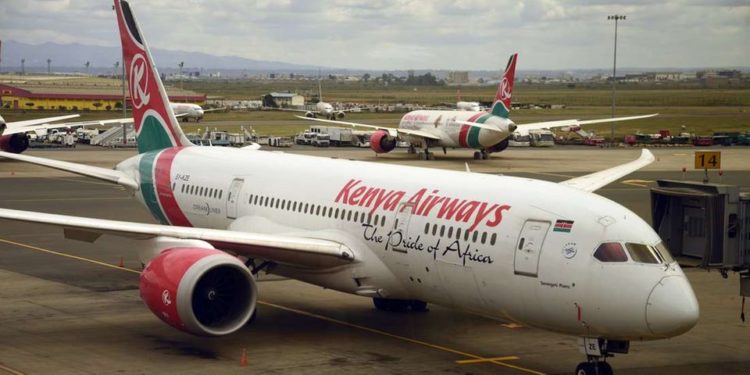 Kenya Airways has initiated talks with companies that leased it aircraft to return them earlier than planned, as a way of cutting on its huge costs and reduce losses.

“The discussions are so that we can be allowed to return the aircraft that are not in use or reduce rentals they charge us,” said KQ managing director Allan Kilavuka.

He said the airline had resorted to reaching out to the companies seeing it was pointless to have several planes lying idle while they continue to cost it an arm and a leg.

In an interview with Smart Business, Kilavuka said in the menu of discussions was identifying the possibility of having the firms charge the airline for leased aircraft on utilisation-based manner, where KQ would only be billed when the planes are flying.

“We are also in talks to be allowed to convert some of the aircraft into cargo carriers especially the Dreamliners and other wide body planes. The cabinet conversion will involve temporarily removal of seats. But it has to be approved by the lessors,” Mr Kilavuka said.

The airline’s cargo operations are currently ranging from seven to 10 percent of its total operations and it says it has been difficult to raise that figure due to the low number of passengers and reduced frequencies.

Mr Kilavuka said the low number of travellers had reduced available seat kilometres to 15 percent compared to last year, a factor that forced the airline to cut the number of aircraft in the skies.

“We have to ensure that we are serving the market that is available,” Mr Kilavuka said.

The strategy to approach its aircraft’ lessors, KQ believes, will be part of the solution to reducing huge costs that have pulled it down, even as Mr Kilavuka admits that KQ cannot survive without a bailout from government.

“I can tell you for sure, we would not survive without bailout. We have not had any significant revenue for six months since Covid-19 halted our operations and there were costs that we continued to incur,” the MD said.

The airline’s management has kept under wraps how much they sought from the State as bailout.

Mr Kilavuka says recovery for KQ may take longer considering a mix of issues that have bogged the airline including problems it has with its employees, and the slowness of talks with their creditors and the lessors, so that the process of returning idle aircraft can end fast.

“We are at a situation where we have to make critical decisions but we do not have the finances. We can’t move as faster too and get done with creditors, lessors and the employees because there are a lot of issues that require approvals. We are running out of time,” Mr Kilavuka said.

The airline is in court with some of its employees after it was sued over plans to lay them off. Mr Kilavuka said KQ’s management and the workers’ representatives are now in talks to end the stalemate, but insisted that the airline can’t afford to foot costs of a redundant workforce.

“We want to have employees based on the assets we have and the current demand. We can’t afford to pay a redundant workforce,” the MD said adding that the airline had suspended an original plan to fire 1,400 workers, as it engages the workers’ union.

He said the airline had let go of 690 staff and was planning to send 590 others home, before it was stopped by the court on the latter.

The carrier wants to bring down to between 40 and 45 percent of its more than Sh6 billion monthly fixed costs most of which are fleet ownership expenses followed by salaries, in order to continue operating optimally. Already, KQ has projected it will lose about Sh70 billion in revenues this year because of the Covid-19 disruptions adding that the market recovery will be slow.

Mr Kilavuka said the soonest the airline expects to recover to full operations is 2023, saying that by the end of the year it will be operating about 38 percent capacity.

The airline also cites the electioneering mood that has already kicked off in the country as one that will affect its business and eliminate chances of its recovery by 2022. It expects to be operating at 60 percent capacity at best by 2022.

“The recovery has been slow since there are many passengers who are still afraid of flying and many people and organisations have been affected financially. Since resumption, domestic operations have moved from 40 percent to 70 percent currently, but international operations are still low with at 40 percent,” Mr Kilavuka said.

He said another cause for poor performance on international flights is because of restrictions placed by other jurisdictions, which have stopped residents from high-risk Covid-19 countries or limited frequencies.

“This is stopping us from growing and even if the load factor for the flights is good, we are operating at a very low capacity,” he said.