Kenya is currently in negotiations with Washington over a new trade deal, as President Donald Trump pushes for bilateral pacts in Africa. 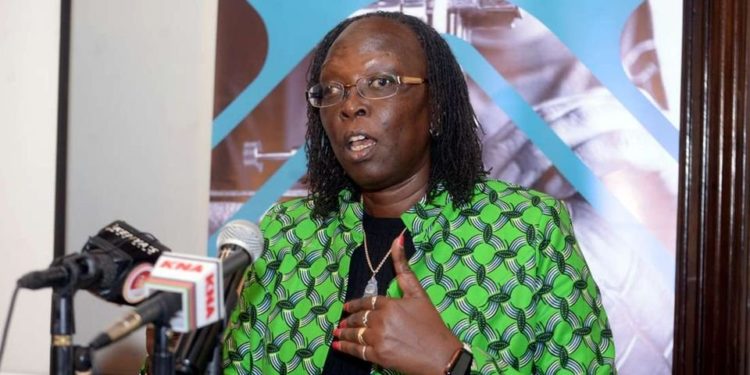 Global environmental activist group Greenpeace is calling on the government to reject a move by American chemical companies to expand the plastics industry’s footprint across Africa.

Currently, plastic is already the US’ biggest export to Kenya, with sales totalling Sh6.21 billion last year, US Congressional filings done in May this year shows.

Documents obtained by Greenpeace show that the American Chemistry Council (ACC), a trade association that counts Shell, Exxon and Total among its members, also lobbied against changes to the international Basel Convention, which put new limits on plastic waste entering low and middle income countries.

Three years ago, Kenya passed one of the toughest laws on the production, sale, and use of plastic bags, and in May this year, expanded it to outlaw plastics in protected areas.

Request not made yet

Trade and Industry Cabinet Secretary Betty Maina told Bloomberg that the US has yet to table the request.

Mr Fredrick Njehu, Greenpeace Africa senior political adviser, urged Kenya not to backslide on the progress made in its plastic-free ambitions by folding to pressure from fossil fuel giants, because it stands to derail the progress made across the entire continent.

“Africa is at the forefront of the war on plastics, with 34 out of 54 countries having adopted some regulation to phase out single-use plastic,” said Mr Njehu.

In late April, the lobby group wrote to US Trade Representative officials, arguing that Kenya could serve in the future as a hub for supplying US-made chemicals and plastics to other markets in Africa through this trade agreement.

The lobby group also called for the lifting of limits placed on the plastic waste trade, which experts believe would circumvent the new Basel Convention rules.

“This trade agreement will be an important model for other African states. With this foothold, the United States can play an influential role in shaping trade policy across Africa, as it will enable the US to build a platform for US chemical manufacturers to expand exports to enter new growth markets throughout sub-Saharan Africa,” the lobby group wrote in another separate letter to the chairman of the US International Trade Commission.

The lobby group also asked the Trump administration to prohibit imposition of domestic limits on production or consumption of chemicals and plastic, and restrictions on cross-border trade of materials and feed stocks, adding that the US and Kenya should “enable trade in waste for the purposes of sound management and recycling consistent with relevant international commitments”.

Greenpeace USA Senior Plastics Campaigner Kate Melges said it was shameful that struggling fossil fuel giants are lobbying for an expansion of their polluting plastic footprint into the African continent to keep their profits flowing. Making public statements about ending plastic pollution while quietly lobbying to allow Africa to be used as a plastic dumping ground is next level hypocrisy and greenwashing, she said.

In a statement, US plastic makers said they are committed to recovering used plastics from the environment – both in America and in developing countries across the globe.

“The chemical industry welcomed an opportunity earlier this year to contribute our knowledge and expertise on trade and plastics as part of a public comment period around newly launched trade negotiations between the United States and Kenya. ACC submitted public comments and participated in a public hearing along with a diverse group of other organizations who are equally committed to engaging in dialogue about how these issues may impact their constituents,” ACC said, adding that a bilateral trade agreement between the United States and Kenya will not override Kenya’s domestic approach to managing plastic waste or undermine its international commitments under the Basel Convention.

“In fact, ACC never mentioned Kenya’s approach to single use plastic bags even once in our comments. The US chemical industry has publicly recommended to the United States government various approaches for the US and Kenya to consider that could help Kenya reach its social, economic, and environmental goals. For example, industry has supported calls to help Kenya more effectively address marine debris by developing infrastructure to collect and sort used plastics, which have been recognized as a valuable feedstock resource. With the support of better waste management infrastructure, countries can recycle and reuse valuable materials and trade them across borders.”