DOZENS of Namibian truck drivers have been crossing borders into dangerous territory to pick up and deliver essential goods – risking their health in the process. 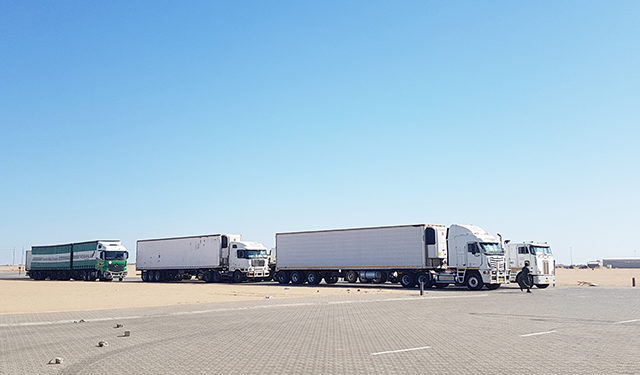 One of them tested positive for Covid-19 at Walvis Bay over the weekend, as announced by minister of health and social services Kalumbi Shangula on Sunday, while another contracted the virus in Zambia where he is currently quarantined.

The 47-year-old truck driver, who is Namibia’s 21st Covid-19 case, returned from South Africa on 8 May and was quarantined at the truck depot of his employer, FP du Toit Transport, at the coastal town.

Before receiving his test results, the man allegedly entered the community with a colleague, but was later apprehended by the police.

“He is a-symptomatic and remains at the Walvis Bay isolation unit. The two truck drivers have since been fired as a result of contravening quarantine rules,” Shangula said.

The latest case puts the plight of truck drivers in the spotlight.

Apart from the risk of contracting Covid-19, truckers also face the risk of road accidents on their long journeys across borders.

Namibian truck driver Wilbard Wilbard (26) lost his life earlier this month in Zambia after crashing into another truck.

Truck driver Jesaja Gereseb, whose employer is known to The Namibian but cannot be named, said they do not receive a risk allowance and are not allowed to go home to their families once they return to Namibia.

“We have to wait for our results. It’s dangerous, because we come from different countries and you don’t know who is sick. We are using the same toilets and office, so every trip is stressful,” he said.

Another crossborder truck driver employed by FP du Toit Transport, who spoke to The Namibian anonymously, said he has just returned from a month-long trip to Zambia.

Upon arrival, he was informed his salary for May has been cut by 50%.

In addition, he was scheduled to return to Zambia three days later, but was told to remain at the depot and could not see his family.

“I spent the whole month sleeping in a truck. Upon arrival I was told to remain on site and to not go home. We are not allowed to leave the depot and have to rely on our colleagues and people from outside to bring us food. To relieve ourselves, we use bottles and plastic bags as the toilets are locked after hours,” he said.

A truck driver feels their efforts are not recognised by the government.

The driver, who delivers food and clothing, wants to know why test results cannot be instant.

“Every time you cross the border, you have to stay at the depot when you return, until you get another load. The company is not providing us with food, only mobile showers and toilets. Our lives are at risk every day,” he says.

The Namibian has established a truck driver’s basic salary is N$6 000 with commission per kilometre and a trip allowance.

Some employees’ salaries have been cut by 50% to prevent job losses.

Another truck driver says they have received personal protective equipment (PPE) from their company, but had to pay for it.

He says truck drivers are tired of airing their grievances, adding their last resort is to protest.

“The company and the government discuss our issues behind closed doors without employees’ input. They are treating us like slaves. Thirty years have passed and still there has been no change in transportation,” he says.

According to this driver, the latest trucks are huge and roads are narrow since the government does not upgrade them.

To reduce the risk of importing Covid-19, some drivers have proposed working on a three-week shift basis.

“The idea is that … after 14 days of quarantine, I should be allowed to spend at least five days with my family and then get back to work,” the driver said.

One trucker, who also spoke to The Namibian on Sunday and wants to be identified as Tony, said being quarantined is reducing their income, because they are either paid per trip or per kilometre.

He said it would be good if the government could provide them with a risk allowance.

Another issue is exhaustion, Tony says.

“When we arrived in Namibia from Zambia, the authorities told us to drive straight to Walvis Bay so we can be quarantined there. We were informed not to stop anywhere or take any breaks and we complied. However, this move is not safe for us, because we occasionally need to rest,” he said.

Stephan Terblanche, the chief executive officer of FP du Toit, said once they return to Namibia, drivers do not get quarantined for 14 days but stay at the depot for two to three days pending their next trip.

“During this period, we do not allow them to go home as per the government and WHO regulations. This rule applies to all drivers all over the world. Our drivers have very comfortable beds in their trucks and they can take their chair out and sit outside. We just don’t allow them to leave the premises and mingle with the larger public,” he added.

John Kwedhi, secretary general of the Namibia Transport and Allied Workers Union (NATAU), yesterday said the union would release a statement today to address the plight of truck drivers and the latest confirmed case at Walvis Bay.

Kwedhi said the union will respond to the drivers who were fired for contravening quarantine regulations after they were apprehended, saying the information was incorrect.

He said they are awaiting information from the Erongo police before they release the statement.

Kwedhi claims the two truckers went jogging and did not leave the quarantine facility before they were apprehended by the police.

Walvis Bay Urban constituency councillor Knowledge Ipinge said the information that the truckers “escaped” from the depot is sketchy, but his office is monitoring developments.

He said the two truckers were unfairly dismissed, as the company allowed them to roam freely without providing food and other basic items while they were quarantined at the depot.

“In the meantime, my office has engaged the company to obtain its Covid-19 response plan,” he said.