Benin : The 26 Abomey Royal Treasures Finally unveiled in a Public exhibition at the Presidency

At the end of the opening, President Patrice Talon expressed his satisfaction, his pride, of what is happening at the Marina Palace. 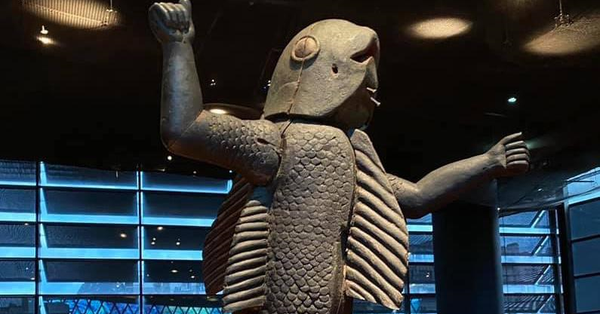 This Saturday, February 19, the opening of the public exhibition debuted for the ‘Art of Benin of Yesterday and Today, From Restitution To Revelation’ royal treasures and contemporary art of Benin. The opening mobilized an array of national and foreign personalities around President Patrice Talon who, on this occasion, improvised himself as a cultural mediator in a masterly way.

For the rest of the process, he reaffirmed his determination to bring back new works with the fruitful cooperation between Benin and France. But what has been achieved is already a lot and we must be pleased, because it is a myth that has been defeated and the rest will be easy, notes the first Beninese magistrate. “It is no longer a concern to know if it is possible or not … We will continue to discuss and work with the French authorities so that some of the cultural works (still in France) return to complement what we have just seen, “said the Head of State. He informs all the same that he does not intend to go to recover all the cultural goods of Benin abroad, because it will not even benefit the country at the time of globalization and globalization.

At the end of the opening, President Patrice Talon expressed his satisfaction, his pride, of what is happening at the Marina Palace.

All things that reveal Benin to the world;

“I, Patrice Talon, with my modest contribution to our action today, that of the Beninese, I strive to reveal Benin to us,” he declared before the crowd of happy and satisfied personalities.

I want to express “my emotion of pride in what we were, in what we are and in what we will be. May God bless Benin,” exclaimed Patrice Talon.