The trailer of the New Black Panther amassed 172 million views In Its first 24 hours, making It one of Marvel's top trailer debuts. 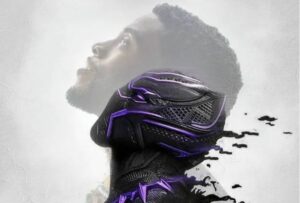 Despite his tragic death at only age 43 in 2020, we knew that the presence of Chadwick Boseman would loom largely in Black Panther: Wakanda Forever, the continuation of Marvel’s superhero series the late actor kicked off with 2018’s box office hit and cultural phenomenon, Black Panther.

That was confirmed Saturday night at San Diego Comic-Con as Marvel debuted the emotionally charged first trailer for Wakanda Forever, featuring poignant shots of Ramonda (Angela Bassett), Nakia (Lupita Nyong’o), Shuri (Letitia Wright) and more as they mourn the loss of Boseman’s King T’Challa. According to Variety, the trailer amassed 172 million views in its first 24 hours making it one of Marvel’s top trailer debuts.

In interviews following Marvel’s SDCC panel, the film’s co-stars discussed the difficulty of continuing the series without Boseman — and how the movie ultimately honors the fallen star.

“Honestly, we paid tribute to Chadwick every single day with every breath and every word and every scene,” Winston Duke (M’Baku) said before adding;

“It didn’t stop being hard just after the first days. The entire year shoot, because of COVID restrictions and everything that happened, we had a very long shoot and every single day was tough. Because that was not just our cohort and co-worker, he was our friend… We got to know him as a human being and not just a superstar.”

Explained Florence Kasumba (Ayo): “At the end of the day, we are a group of people that trust each other and you feel when somebody needs support, in certain scenes or on certain days… For me every time I would go to work or every time I would speak about Black Panther, whether it’s the first movie or the second, I always think of Chadwick. And that hurts, but it also makes me happy that I was able to work with him and that I was able to learn so much from him. And that’s just how we have to continue. We will never forget him.

“What he brought to the MCU and to Wakanda is something that we want to continue. We want to be strong and fierce and be honest and tell the story and entertain people and make people think.”

“He was present every time throughout the shoot,” said Livinalli. “You would hear stories from the crew, from the cast, how Chad was, his personality, the things he would do… I’m sure he’d be happy that we continued.”

“And for him we are here,” added Cadena.