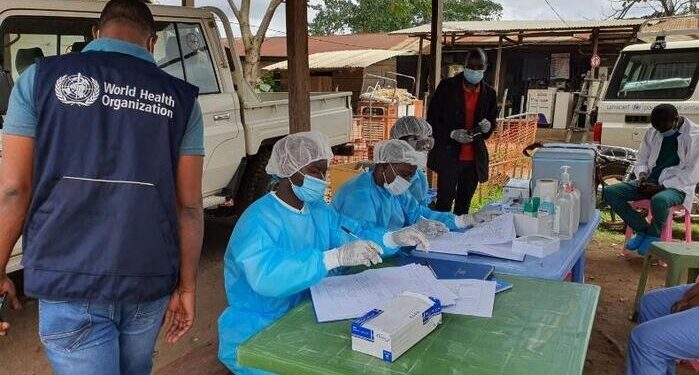 In addition to the COVID-19 pandemic that has so far infected almost 12 million people in Africa and claimed over 250,000 lives, the continent is currently battling 11 other mostly zoonotic disease outbreaks.

Dr. Ahmed Ouma, acting director of the Africa CDC, said the outbreaks are coming in the context of health systems weakened by COVID-19 and limited resources because so much has been used in addressing the pandemic.

Nevertheless, he expressed the AU health agency’s commitment in helping the affected countries contain the outbreaks and prevent further spread.

“This is the time when all the tools available, whether diagnostics, therapeutics or vaccines, need to be made available to Africa so we can handle the outbreaks more efficiently to avoid further spread,” Ouma said.

He said while some Western countries have stockpiles of monkeypox vaccines, to date Africa has none.

Ouma added the continent doesn’t have a sufficient number of test kits but appreciated the fact the few available ones have enabled increases in testing as evidenced by the increased number of confirmed cases last week.

During the past week, Nigeria has reported 73 additional cases of which 17 are confirmed while Cameroon reported two new cases, one of which was confirmed.

Ouma attributed the increased number of confirmed cases to the training they held about three weeks ago across the continent.

He said Africa CDC will continue to provide lab training, reagents and test kits as well as train surveillance teams especially ones working on national borders.

“We will also support pathogen genomics, so that we sequence them and ensure we are getting the right material and information from the sample that we are collecting,” Ouma said.

In addition to monkeypox, Nigeria is also battling Lassa fever, an acute viral hemorrhagic illness caused by the Lassa virus.

Humans usually become infected with the Lassa virus through exposure to food or household items contaminated with urine or feces of infected Mastomys rats.

According to Africa CDC data, Nigeria has reported 6,581 cases of Lassa fever, of which 886 have been confirmed and 180 died.

Apart from Nigeria, six other countries are affected, largely within West Africa.

Ouma said Africa CDC is supporting countries in monitoring and training based on surveillance as well as laboratory experts.

On July 18, Tanzania reported an outbreak of leptospirosis, a rare bacterial infection spread through urine from dogs, rodents and farm animals. The East African country has reported 20 cases, of which three have died.

Ouma said Africa CDC is working with Tanzania’s Ministry of Health and the Ministry of Agriculture, Forests and Wildlife to contain the outbreak and prevent further spread.

Last week, Ghana reported two cases of Marburg disease, both of which died. It was the first time the country reported the deadly disease.

Ouma said Africa CDC is working with the government of Ghana to ensure all suspected cases are tested and information is provided to health workers so they are able to manage any case.

Dr Matshidiso Moeti, the WHO regional director for Africa, said there are no vaccines nor treatments for Marburg, making immediate and decisive action to curb any potential spread critical.

She said 108 contacts were identified in the West African country, including health care workers and community members, and they are all in good condition after 21 days of observation.

“Neighboring countries are on high alert, and we are supporting Ghana to bolster surveillance, testing and tracing and to make preparations for the safe management of any new cases that may be identified,” Moeti said.

Other outbreaks include polio in Malawi and Mozambique; yellow fever in Cameroon and Kenya; Crimean-Congo hemorrhagic fever in Uganda and dengue fever in Sao Tome and Principe.

This is in addition to bacterial meningitis in the Democratic Republic of Congo and cholera in at least 10 AU member states.