Africa CDC, has called on the world to enable Africa to access adequate COVID-19 vaccines.

All the regions across the globe apart from Europe reported a drop in COVID-19 infection cases in the week ending Oct 3, Africa reported the largest decline, 43% -- WHO 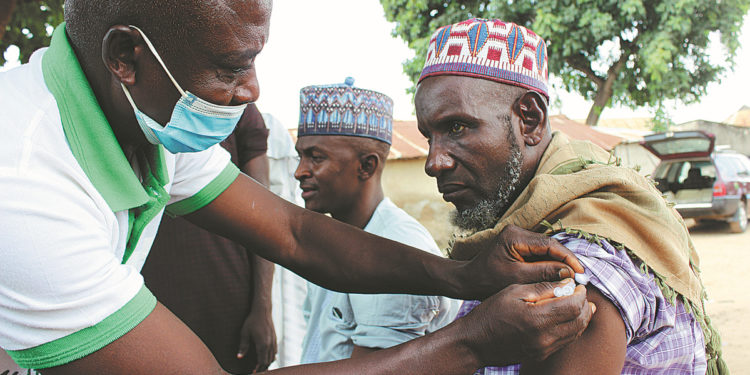 Even as the continent is seeing a significant decline in new cases and deaths recently, the Africa Centers for Disease Control, or CDC, has called on the world to enable Africa to access adequate COVID-19 vaccines.

In its weekly epidemiological update on Wednesday, the World Health Organization also recognized the remarkable decline reported in the continent.

All the regions across the globe apart from Europe reported a drop in COVID-19 infection cases in the week ending Oct 3, and Africa reported the largest decline, 43 percent, the WHO said.

Over the four weeks ending Oct 3, the continent reported an average fall of 20 percent, the CDC said.

Apart from the Central Africa region that reported a 31 percent average rise in the number of new cases, all other regions reported fewer cases.

John Nkengasong, director of the Africa CDC, said inoculation rates in the continent, 4.6 percent, are still low compared with other parts of the world. The positivity rate remains high at an average of 11 percent, he said.

“We continue to make an appeal to the global community that enabling the continent to get vaccinated at scale and at speed is a way to ensure the collective security of everybody. What will solve the COVID-19 problem is where and how we get the vaccines in the arms of people as quickly as possible.”

There were indications that 40 percent of the deaths in the continent occurred in the last couple of months, he said.

Because of limited access to vaccines, about 80,000 people died in Africa in about two and a half months, he added.

“While the case ratio has decreased to 8.8 percent, our target is to make sure that countries conduct 10 tests per case.”

“We call on every partner, the friends of Africa, that it’s time to translate pledges and promises into action so that we can save many more lives,” Nkengasong said.

Despite the low vaccination rate across the continent, Nkengasong said some African countries are making good progress in advancing toward a fully vaccinated population.

Fifteen countries have fully vaccinated more than 20 percent of their eligible population, the CDC said.

South Africa, the most affected country in the continent in infections and deaths, has fully vaccinated 20.1 percent of its populations.

Burundi and Eritrea have yet to start vaccination campaigns, but Burundi has engaged the COVAX facility and the African Vaccine Acquisition Task Team to acquire vaccines.