The Federal Government and organisations intensified efforts yesterday to check the spread of the coronavirus. 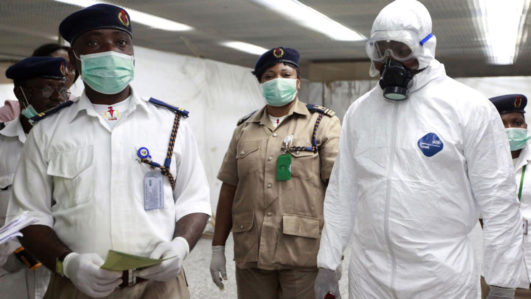 At the nation’s seat of power, the wife of the President, Aisha Buhari ordered the immediate shutdown of her office for two weeks and directed the staff of her office who recently returned from the United Kingdom to work from home.

She further disclosed on her Twitter handle, @aishambuhari, that her daughter who “returned from the U.K. being among the high-burden listed countries of COVID-19…is on self isolation, not because she displayed any symptoms.”

Also, the Christian Association of Nigeria (CAN) yesterday directed churches in the country to avoid gatherings of more than 50 people as a precaution against the coronavirus (COVID-19) pandemic. It also suggested the adoption of cell-based or online services, and shifts of not more than 50 individuals per session.

Commissioner for Health Prof. Akin Abayomi, who disclosed this, said health officials were tracing over 1,300 persons in connection with the cases.

Nineteen people were tested for the virus on Wednesday, said Abayomi. Of these, four cases turned out positive and have since been isolated for treatment at the Infectious Disease Hospital, Yaba, Lagos.

One of the four new cases was a woman who had contact with another woman that had earlier arrived in Nigeria from the United Kingdom. Another was a female who returned from France March 14 on Turkish airline TK 1830. The third was a Nigerian male in his 50s, who had not travelled anywhere. The fourth, also a Nigerian male, had arrived in the country on March 13 from Frankfurt on a Lufthansa flight LH568.

Abayomi also revealed that the state executive council would soon issue a directive on social distancing. In a statement, CAN President Samson Ayokunle urged churches to, as they put their trust in God, adhere strictly to all guidelines for combating the plague.

Similarly, the Sultan of Sokoto and President-General, Nigerian Supreme Council for Islamic Affairs (NSCIA), Alhaji Muhammad Sa’ad Abubakar, issued a statement yesterday calling on Muslim organisations, mosque committees, Imams, scholars, Da’awah activists and the general Muslim Ummah to adhere strictly to all public health directives and regulations provided by the competent and authorised agencies such as the Nigeria Centre for Disease Control (NCDC).

The statement urged “Business owners and traders” to “fear Allah and avoid hoarding essential products, creating artificial scarcity or unnecessary inflation of prices. Similarly, the populace should be considerate in their purchases and avoid reckless and extravagant purchases that prevent others from accessing essential commodities.”

Religious groups across the nation have already begun complying with government directives, while putting in place other measures to tackle the disease.