The cold storage facility to be built by Sinovac will have a storage capacity of 150 million doses of vaccine and is expected to be the largest vaccine storage center in Africa. 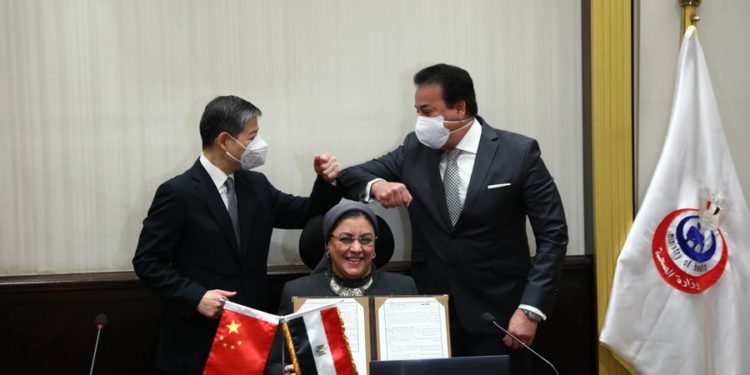 CAIRO – China’s biopharmaceutical company Sinovac has signed a cooperation agreement with Egypt’s Holding Company for Biological Products and Vaccines (VACSERA) to establish a cold storage facility for vaccine storage and preservation in Egypt, said the Chinese Embassy in Egypt on Wednesday.

The agreement was signed between the two companies via both a video conference and an offline ceremony attended by Egyptian Acting Health Minister and Higher Education Minister Khaled Abdel-Ghaffar and Chinese Ambassador to Egypt Liao Liqiang at the Egyptian Health Ministry’s headquarters in Cairo.

“China-Egypt anti-epidemic cooperation has continued to deepen and vaccine cooperation has seen many bright spots. China is willing to continue to work with Egypt to strengthen mutual confidence and overcome difficulties together,” said the Chinese ambassador.

“China will donate another 10 million doses of COVID-19 vaccine to Egypt to help Egypt achieve its goal of vaccinating 70 percent of its population by the middle of this year,” Liao added.

The fully-automated cold storage facility is agreed to be built in VACSERA’s new factory complex in Giza’s 6th of October City west of the capital Cairo.

For his part, Abdel-Ghaffar expressed appreciation of China’s “strong assistance” to Egypt with the anticipated cooling unit and the millions of doses of vaccines.

“China’s pragmatic measures to provide Egypt with a new batch of 10 million doses of vaccine fully demonstrate the firm determination of China and Egypt to fight the epidemic together,” said the Egyptian minister during the signing ceremony.

Egypt is willing to continue to strengthen cooperation with China in localized vaccine production, technology transfer and drug research and development, so as to make greater contributions to the fight against the pandemic in Africa, Abdel-Ghaffar added.

Sinovac and VACSERA already have a cooperation agreement for joint vaccine production signed in April last year, according to which the Sinovac vaccines are locally manufactured in VACSERA’s factory in Egypt, with the final product carrying the VACSERA-Sinovac label.

Through the joint production, Egypt seeks to become a hub for vaccine export in Africa.