ens of thousands of Ethiopians gathered on Sunday in the capital Addis Ababa to denounce foreign interference in the country's internal affairs. 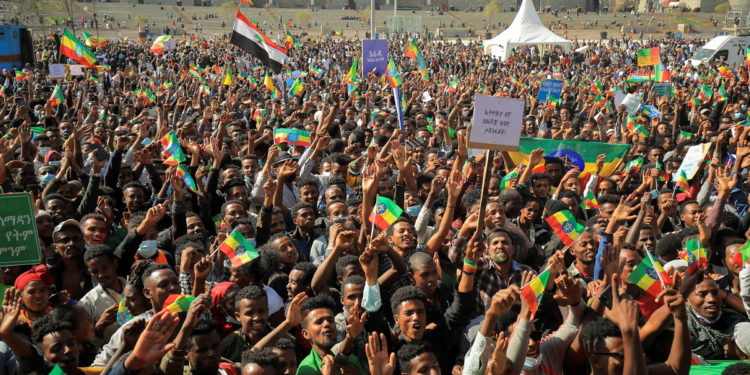 Addis Ababa Mayor Adanech Abiebi told the crowds in the city’s Meskel Square that neither the multifaceted external pressure nor attacks by rebels would deter Ethiopians from realizing their aspirations for national development.

The demonstration was aimed at showing popular support for the national call made by the Ethiopian government to defend the country from what it described as “internal and external enemies of the country”, in particular the Tigray People’s Liberation Front, or TPLF, and its allies. Abiebi said foreign interference and external pressure on the East African country was being carried out with goal of subjugating the Ethiopian state to foreign interests.

The mayor stressed that “Ethiopians will undoubtedly avert any interference and pressure standing together in unity”.

The demonstration came days after the Ethiopian House of People’s Representatives endorsed a nationwide state of emergency to apply for six months amid the expanding conflict in the northern part of the country.

In recent days, the TPLF has declared control of Dessie and Kombolcha, key cities in the Amhara region, some 380 kilometers north of the capital.

In response, there was a huge popular mobilization by the Amhara and Afar regions to fight back against the TPLF’s incursions.

The administration of US President Joe Biden on Tuesday accused Ethiopia of “gross violations” of human rights and said it planned to remove the country from a US’ trade pact.

Some demonstrators at the weekend voiced anger over the US call for the government and the TPLF to negotiate.

Canada has withdrawn the families of its embassy staff and nonessential Canadian employees, the foreign ministry said on Sunday.