From power to ports, ventures with support from China spur hopes for local recovery 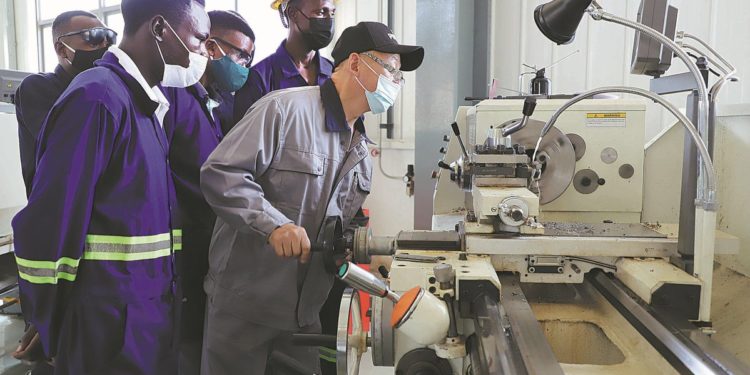 Work on infrastructure projects backed by the Belt and Road Initiative maintained a steady pace in Africa last year, thanks in part to some creative ways of managing construction tasks during the pandemic.

Smaller work teams were part of the solution at construction sites as African nations pin their hopes on BRI projects to rebuild their economies from the impact of COVID-19 and address a widely acknowledged deficit in vital infrastructure.

The BRI-backed projects also provide plenty of jobs for Africans at a time when many have been thrown out of work because of the restrictions imposed to control the pandemic.

The need for infrastructure in Africa is clear. Almost 600 million people in sub-Saharan Africa lack access to grid electricity, accounting for more than two-thirds of those worldwide in this predicament. About a third of people in rural areas have no sealed roads serving their communities, data from African Development Bank indicate.

The bank estimates the continent’s infrastructure needs at $130-$170 billion a year, with a financing gap in the range of $68-$108 billion.

The Legatum Institute, a think tank in London, said a third of the continent’s financing needs are required for the maintenance of existing facilities.

To realize such levels of expenditures, African countries are required to spend an additional 1 percent of GDP annually on infrastructure, above the 3.5 percent that has been spent consistently since 2000, the institute said in a report for 2021.

Still, Africa is gradually making progress on infrastructure thanks to China, which is providing technical skills and funding through the BRI and the Forum on China-Africa Cooperation, a bilateral platform that has helped bring China and Africa closer together.

According to the Africa Policy Institute, a pan-African think tank in Nairobi, China is not only upgrading rural roads but is also helping to develop the Trans-African Highway Network of more than 56,000 kilometers, according to estimates.

“By contributing to the development of Africa’s highway infrastructure and opening up of road-based corridors, China is helping Africa to win the war on poverty eradication through trade promotion and overall economic growth,” the institute said in a report released in November.

By late that month, 52 of the 55 members of the African Union were participating in the BRI, which was proposed by China in 2013 as a means of improving connectivity among countries through increased trade, economic integration, and cultural exchanges. The BRI projects have shown resilience in the face of the pandemic.

According to China’s Ministry of Commerce, China’s direct investment in Africa reached $2.07 billion from January to July, outperforming the pre-pandemic level in the same period of 2019.

As part of efforts to enhance anti-pandemic cooperation, Chinese firms were quick to resume operations in Africa after initial disruptions caused by the pandemic.