BENIN: The Republic Of Benin And Neighbors’ Niger Begin a new phase of cooperation

After more than eight years of stalemate, the Benino-Nigerien Joint Commission resumed its activities. 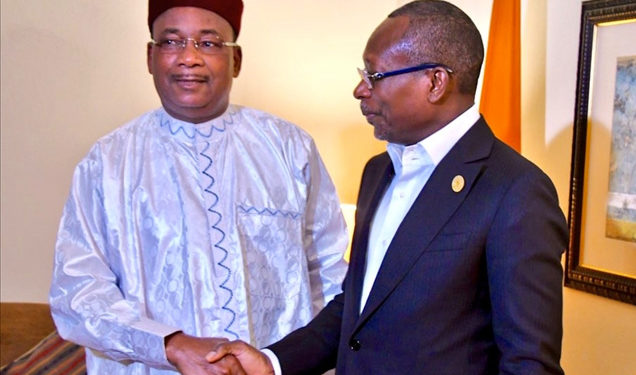 The 11th session of the committee held this Tuesday November 23, In Cotonou, resulted in important recommendations for a more dynamic cooperation with favorable prospects for the welfare of both peoples.

The 11th ministerial session of the Benin-Niger Grand Joint Commission began this Tuesday November 23rd in Cotonou, this Cooperation amongst neighbors was an opportunity for authorities at the highest level of both countries to reflect on measures to strengthen and diversify their cooperation in all areas of common interest.

During the meeting, the Beninese and Nigerien ministers examined and approved the recommendations of the experts’ in relation to the Benin-Niger corridor, security issues, the Cotonou-Niger-Ouagadougou-Abidjan railway loop, the Niger-Benin oil export pipeline construction project, and the liquidation of the assets of the former OCBN.

Speaking on the cooperation between both countries; Aurelien Agbénonci stated that he would like to retain in particular the continuation and finalization of ongoing projects, the acceleration of projects in preparation as part of the rehabilitation of the road corridor, the effective implementation of agreements signed between Benin and Niger on the operation of a direct air line between the two countries, the revitalization of cross-border cooperation in the spirit of AU and ECOWAS recommendations, the need to finalize the materialization of the common border line between the two countries in accordance with the ruling of the International Court of Justice, and the formalization of a framework for cooperation on security and intelligence.

At the end of the session, El Mouctar Mohamed Youssouf welcomed the friendly atmosphere that characterized the proceedings adding that these features have allowed fruitful discussions on the state of cooperation between both countries and explore further opportunities that emblem in the symbiotic progress for both nations.