Roughly 21.6 million people out of a possible 39 million cast votes. With 50.44 percent in his favor, Petro beat out independent candidate Rodolfo Hernández, who earned 47.3 percent of the vote. 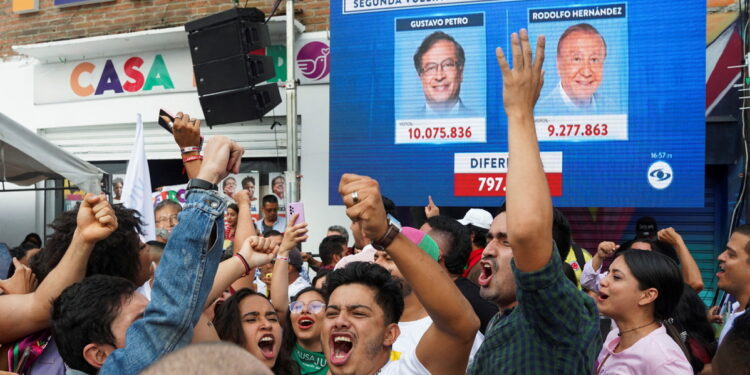 Under torrential rain Sunday afternoon, residents of the Colombian capital of Bogota poured out onto the streets and piled into the large Movistar Arena to celebrate the historic victory in presidential elections of Gustavo Petro and his vice-president Francia Márquez.

The country’s red, blue and yellow flag was visible everywhere, even in a sea of umbrellas and ponchos, which kept the rain at bay but could not hide the jubilant spirits. Chants of “si se puede” (“yes, it’s possible”) resonated from the stadium and throughout the city.

Petro received 11.2 million votes in a second round of voting on Sunday, the most ever gathered by a single presidential candidate in the country, but still a narrow victory by more than 700,00 votes.

Petro’s win came as discontent grows in the country over inequality, inflation and violence that seems to be intractable.

Erick Behar, a Colombian economics professor at the Berlin International University of Applied Sciences, told China Daily that Petro’s victory follows a trend of populist victories in Latin America and some consider it as an opportunity for deep reform, perhaps in the sense of the failed agrarian reform of the 1930s.

A local Colombian, Belsie Dasa, was cautiously optimistic that Petro’s victory could lead to more peace. “All the right-wing presidents don’t do what they promise and violence keeps happening. Maybe Petro will finally get it done,” she told China Daily.

It was the third time Petro, a 62-year-old economist and former guerrilla fighter, runs for president. He is currently a senator and was the mayor of Bogota from 2012 to 2015.

Petro’s victory is not without controversy. Despite the number of votes he earned, the election was hard fought. His experience as a member of the defunct M-19 guerilla movement may have been part of his appeal, also brings detractors.

Left-leaning partis have long been left out of power in elections in Colombia because they were seen as being associated with armed conflict that has racked the country for decades. But Petro has told the country his government will introduce economic reform to improve people’s livelihood and gear up the country’s development.

Celebrations were visible in most of the country’s big cities, where most of Petro’s support came from.

In Cali, large crowds chanted and hugged in celebration. In the smaller city of Bucaramanga, the crowds were smaller but crowds and convoys of cars, many honking horns and blaring messages of victory through loudspeakers, took to the streets.

“Today is a day of celebration for the people. Let them celebrate the first popular victory,” Petro said in a Tweet.