The 36-year-old said his parents were struggling to obtain a good yield from their farmland with a lack of agricultural technology, high-quality crop varieties and machinery and the seasonal and unstable rainfall. 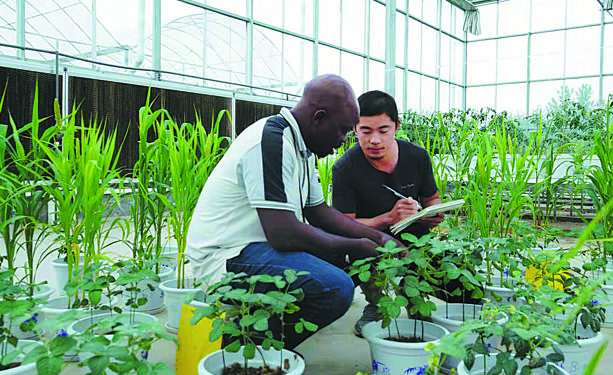 Growing up in a small village in central eastern Burkina Faso, Saturnin Zigani has a keen understanding of the challenges the African nation faces as it strives for food security.

“I decided to learn about good agricultural techniques and practices in order to help my parents improve their yield, and in general, to help my nation attain food security,” he said.

In September 2019, Zigani, who was then an employee at Burkina Faso’s Ministry of Agriculture, embraced an opportunity to study as a postgraduate student in China. He hoped that China’s successful poverty alleviation campaigns and ability to feed its 1.4 billion population with only 9 percent of the world’s arable land, according to a document released by the State Council last year, could be a story that his nation could emulate.

He arrived in China along with another 34 students from Africa as part of a capacity-building program launched by Beijing after the two nations reestablished diplomatic ties in 2018.

Zigani got the chance to pursue a master’s degree on resource utilization and plant protection at the Chinese Agricultural University in Beijing as a member of Sino-Africa Science and Technology Backyard project, allowing him to “understand how China has improved its agricultural production to attain food security and eliminate absolute poverty (by the end of 2020)”.

During his two-year experience in China, Zigani interacted extensively with Chinese farmers, fellow researchers and agricultural companies while focusing his study on comparing the effects of associated crop systems to increase nitrogen-use efficiency.

At the university’s experiment station in Quzhou county, Hebei province, he worked together with the farmers in each process of field trials for millet and soybean intercropping-soil preparation, fertilization, seedlings, weeding and yield assessment. From this experiment, he got an attractive average millet yield of 6 metric tons per hectare, compared to millet yield in Burkina Faso, which is lower than 1 ton per hectare.

Zigani is determined to put the expertise he has accumulated in China through the Science and Technology Backyard program to full use after his graduation this year and return to his home country-a process he said will involve working with farmers to increase their crop yield and knowledge-sharing with fellow workers.

He said he hopes to establish a similar research program in his country, in which farmers, researchers and universities can work together to identify key agricultural challenges and jointly find solutions.

“I would also like to be a facilitator for stronger relations between Burkina Faso and China, and to work toward even closer cultural exchanges between both countries,” he added.