The municipal cemetery in the area is reported to have been systematically invaded by suspected human bone traffickers. 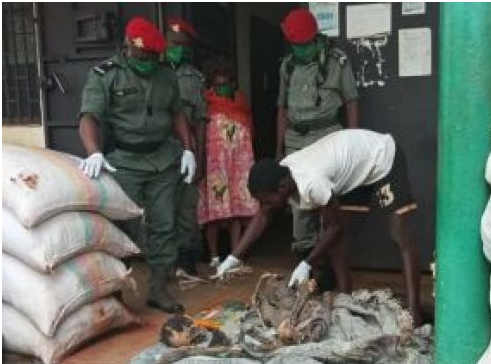 Inhabitants of Cameroon’s border locality of Kye-Ossi in the South region, bordering are in shock following digging of human bones from cemeteries in the locality by suspected human bone traffickers.

The municipal cemetery in the area is reported to have been systematically invaded by suspected human bone traffickers. Reports made security officers hold that virtually every grave in the cemetery has been defiled and remains of human bones carted away. Security operatives have launched a fierce war to curb the growing the phenomenon.

Some suspects were recently nabbed in an operation carried out by security officers led by Major Yves Robert Awoumou Owona. They officers had disguised as buyers, making it easier to get the suspects red-handed.

“Having received information on the illegal transaction, we got in touch with the traffickers and set up an ambush in the hotel where the delivery had to take place. They had set the price of the two bags of human skeletons at FCFA 21 million…,” Owona said.

A similar incident was recorded in the Sabongari neighbourhood of Ngaoundere II subdivision, in Adamawa region. Here, three suspected traffickers were apprehended by officers of the Adamawa Gendarmerie Legion.

The suspects, with bones about the size of a human skeleton, were caught red-handed selling their booty to an informant who had infiltrated a ring of human bone smugglers, the Commander of the Adamawa Gendarmerie Legion said.

Their initial questioning revealed that these bones were dug up at Tcholire, Mayo Rey division, by the accomplices. An investigation team was set up at the headquarters of the Adamawa Gendarmerie Legion in order to arrest the other gang members.

Trade in human bones has gradually being gaining ground in Cameroon. Just recently, four suspects aged 23 to 29 were arrested as they attempted to sell two bags of human bones in a hotel in Cameroon’s economic capital city, Douala. The booty was evaluated to have fetched the traffickers not less than 21 million FCFA if they were not intercepted by security forces.

Meanwhile, in the North region, officers of the GarouaI II Gendarmerie told reporters that several individuals suspected to be involved in the trafficking of human bones and the sale of illicit drugs were arrested.

They were arrested during an operation launched by the Gendarmerie officials in Mayo-Bocki in the Lagdo subdivision, of the North region. Gendarmerie officials said the operation was aimed at fighting crime in the city amidst a recent growing wave of insecurity, particularly kidnappings for ransoms, highway robbery, cattle theft, human bone trafficking, and illicit drugs trafficking.

A report submitted after the operation revealed that other illegal items were seized from the suspects by the Gendarmes which included a large quantity of tramadol, cannabis, cocaine and another locally made drug popularly known as “Choukoudai”. The suspects were placed under detention by the Gendarmes while further investigations continue.

In the West region of Cameroon, three human bone traffickers were also arrested recently in the Noun division. Security officers identified the body parts as those of a woman who died some six months earlier, still wearing grave clothes and artificial hair on her natural hair. The grave from where the bones were dug was traced to a locality some 35 kilometres from Foumbot.

Security officials said the traffickers were trying to sell the bones for 30 million FCFA when they were intercepted by the gendarmes. The investigation that led to the arrest was conducted by the gendarmerie brigade of Foumbot with help from LAGA, a Non-Governmental Organisation, NGO specialised in wildlife law enforcement.

Gendarmes later found that the human bones were stored in the house of a lady in Baigom, who was also arrested.A thorough investigation into the case revealed that the traffickers belong to a human trafficking network and one of them was a former wildlife trafficker who turned into a human bone trafficker.

In January of this year, four traffickers were also arrested in Koutaba, West region. They were said to have dug up a corpse which they allegedly sold for 10 million FCFA. In Cameroon and most other African countries, human bones are said to be used in mystical rituals and traditional medicine.