The proposal recalled the cooperation between China and African countries in combating the Ebola virus that raged in West Africa in 2014, and praised their mutual assistance and trust shown since the outbreak of COVID-19. 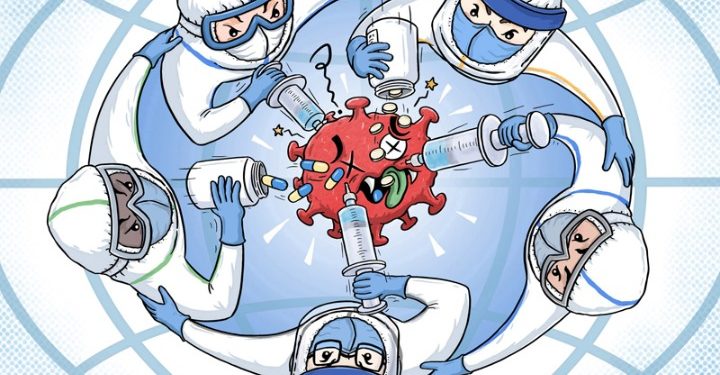 “We deeply understand the significance for the world to defeat COVID-19, as it is a common enemy of mankind … COVID-19 thus knows no borders and has swept around the world causing illness and an increasing number of deaths, and it is having a devastating impact on global economic well-being,” reads the opening remarks of the proposal.

In the arduous battle against the virus, the 60 scholars and think tank leaders called for multilateral cooperation on medical work and disease control, public health security and crisis preparedness. They also called for avoiding politicizing the virus, creating bias and prejudice and fueling stigmatization.

The proposal was issued at an international videoconference co-hosted by the Africa Institute of South Africa, the National Institute for Policy and Strategic Studies of Nigeria, and the Institute of African Studies at Zhejiang Normal University.

We deeply understand the significance for the world to defeat COVID-19, as it is a common enemy of mankind. We furthermore agree that COVID-19 poses an unprecedented threat to the health of African citizens and to its hard-won developmental and economic gains. The threat posed by any infectious disease, like COVID-19, impacts the entire human race, regardless of nationality, region or ethnicity. COVID-19 thus knows no borders and has swept around the world causing illness and an increasing number of deaths, and it is having a devastating impact on global economic well-being. Factors of wealth, poverty, nationality, race and class have been rendered meaningless as infections continue to grow in developed and developing countries alike.

Only by conquering COVID-19 can the world look forward to a brighter future. In China, President Xi Jinping declared a “people’s war” to fight this invisible enemy by mobilizing the whole country. China subsequently launched an unprecedented, comprehensive, resolute and aggressive response to COVID-19, which was applauded internationally.

China has expressed its heartfelt gratitude to the African Union (AU) and many countries in Africa that conveyed their sympathies and supported China in a critical and difficult time. At the 33rd AU Summit in Addis Ababa, Ethiopia on Feb 9, 2020, the leaders unanimously expressed their support to the government and people of China and commended China for its efforts to control the spread of the virus and expressed the hope that China would overcome its challenges.

The global spread of COVID-19 is constantly emphasizing the critical need and urgency of international cooperation. In fact, the spread of COVID-19 served as a stark reminder that in our interconnected world, no country and no nation exists for and of itself. It has affirmed once again that realizing a continent and a world free of hunger and disease requires the collective efforts of all.

It is against this background that China, a country strongly committed to multilateralism and international cooperation, stands ready to enhance its cooperation by sharing its experiences and giving aid and support, so as to collectively address the common challenges of COVID-19 and build a shared future for mankind. So far China has offered assistance to 127 countries and four international organizations to combat COVID-19, and the aid is expanding.

African countries, like the rest of the world, are currently battling to contain the increasing spread of the worst global public health emergency in a century. African countries are increasingly working together, speaking with one voice and acting in unison. There is a common appreciation that if the disease is not contained, it could present a very real and serious setback to all African countries as the continent strives to eradicate poverty, inequality and underdevelopment in already constrained circumstances. Africa needs to act swiftly and to undertake extraordinary measures.

On March 26 and April 3, 2020, at the teleconferences of the African Union Bureau chaired by President Cyril Ramaphosa, the Chairperson of the AU Commission Moussa Faki Mahamat and leaders from Egypt, Mali, Kenya and the Democratic Republic of Congo deliberated at length on steps and measures that Africa should implement to counter COVID-19. Other participants included the leaders of Rwanda, Ethiopia, Senegal, Zimbabwe as well as WHO Director-General Dr. Tedros Adhanom Ghebreyesus and the Africa Centers for Disease Control and Prevention (CDC) Director Dr. John Nkengasong, who provided an update on the state of the pandemic in Africa and across the world. The Bureau also acknowledged the commitment of China for its support and solidarity with Africa.

This must be seen against the background of Africa and China always having been a community with a shared future. African leaders and people spontaneously came forward with messages of sympathy and solidarity to China as well as donations to China. Such assistance offered by Africa reflected the strength and the depth of the relations and friendship between Africa and China.

Africa will never forget that when the Ebola virus raged through West Africa in 2014, the Chinese government was among the first to offer help, deploying 23 charter flights to deliver emergency medical supplies and food, and sending over 1,000 medics to the affected areas. Africa and China fought side by side until the victory against the virus was won. China has continued to expand its extensive medical aid and support to Africa to this date.

China has already proven its resolve to assist the African continent with the scourge of COVID-19 in a growing number of countries on the continent. The Chinese Center for Disease Control and Prevention is in constant contact with and assisting to modernize the African Center for Disease Control and Prevention in Addis Ababa, Ethiopia, as well as with many individual countries. Chinese private enterprises are also increasingly extending a hand to Africa to fight COVID-19.

We believe in dispelling the dark clouds of COVID-19 through international cooperation and solidarity. We reject the negative approach which prevails in certain countries and quarters to politicize the fight against COVID-19 and in the process fuel stigmatization and prejudice against China, whose people suffered significantly during the virus crisis.

It is against this background that Africa and China commit themselves to jointly fight the battle against COVID-19, which is posing a growing and serious threat to the political, economic and social well-being of Africa and China, as well as to the international community at large.

We propose to work together, bilaterally and multilaterally, towards the following:

– to upgrade the Africa and China cooperation in medical and health care, including to give support to Africa Centers for Disease Control and Prevention to enable them to bolster health infrastructure and health systems on the continent in both their respective national responses and the continental effort.

– to enhance Africa and China joint research collaboration on the critical concerns emerging in curbing the spread of COVID-19, including public health security and disease control, as well as crisis preparedness and governance capacity.

– to strengthen the communication and cooperation between African and Chinese research institutions, think tanks and media outlets to provide intellectual support to the fight against COVID-19, with this conference as an effort in this respect.

This global pandemic has exposed the fragility of inward-looking and insular political, economic and social systems. We therefore wish to call for enhanced international cooperation and solidarity, and a new moral economy that has people and their welfare at its center.

The mutual assistance offered by Africa and China over many decades, through good times and bad has always been a trademark of Africa and China cooperation and solidarity. This friendship and bond are deeply rooted in the hearts of the African and Chinese people, and it grows in working together to fight against COVID-19.

We believe a friend in need is a friend indeed. In this crucial time, Africans and Chinese, more than at any other time in recent history, need to rely on the trust, understanding and support of each other, to fight against COVID-19 and to build a community with a shared future for mankind.