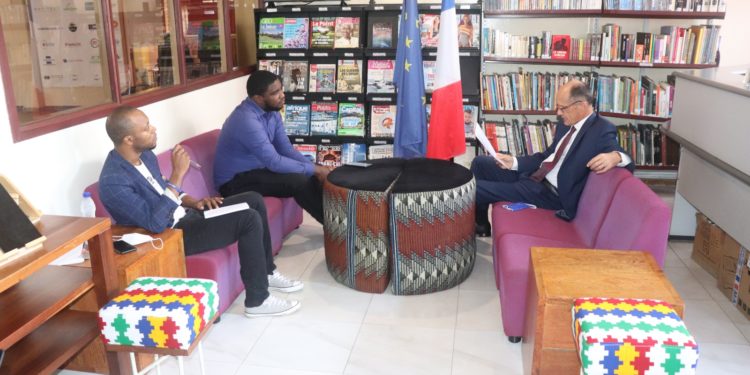 A few weeks ago, on October 8th, the 2021 edition of the France-Afrique summit took place in Montpellier, France. Present were Entrepreneurs and Business leaders from Equatorial Guinea alongside the French Ambassador to the country, Olivier Brochenin. Dreams Talks recently sat with the ambassador in a one-on-one interview discussing everything from the summit to education, business and much more. This is the conclusion of the two-part series.

Dreams Talks: The French Embassy here isengaged in different programs, like vocational ones, how has it been?

Ambassador Brochenin: You are right, let´s not forget professional training. Ecuatorial Guinea has an advantage: the only Spanish speaking country in Africa. Because by speaking Spanish you open the doors of Africa to the Hispanic world. It is a good diplomatic method. It is an added value, which only you have and you have to be very proud of. It can also sometimes be a factor of isolation, but balanced by the fact that the country is opened to its linguistic hinterland, for instance through francophonie. Coming back to vocational training, Equatorial Guinea has a challenge here. That is, you need electricians, plumbers, cooks, and almost everymost basic competences. This year we have supported Malabo Professional School, October 12, that trains waiters, waitresses. We are training them in the French Residence, because we have a Chef and the tools, in the framework of “Goût de France” promoting local products through French cuisine technique. We also do it with the French cultural Institute, providing workshops to give these waiters and waitresses the opportunity to work in different areas of their profession. Thus, as a Diplomat, I am able to organize a prestige official lunch, with the aprentices from the local school who will do the service or carry out the protocol. There are things that can be done both at the Erasmus level, or more local day by day level here.

Dreams Talks: How can Equatorial Guinea businesses and entrepreneurs get their services into France and mainstream Europe?

Ambassador Brochenin: First, we must identify the production sectors in Equatorial Guinea. The country is blessed to have oil and other mineral resources; today oil has occupied the entire economy of the country. Now when I listen to the Ministers of Finance, of Mines, of Tourism speaking of diversification, there´s a desire to build new production capacities: in the field of agriculture, fishing, tourism and new technologies. In line, all the work of Dreams Hub, that is to share knowledge in new technologies with young people who have all the intelligence like all human beings, but who do not have access to opportunities. This capacity, of intelligence of the youth to work in Spanish, to work in French, in Portuguese, in English, is a great skill.

These added values can be translated into new technologies. Let us think of a country like Israel. It is a small country with no natural resource, but it is a powerhouse in new technologies, thanks to human training and intelligence. Equatorial Guinea could be among these powers. Nevertheless today, when French entrepreneurs or the trade union of the French entrepreneur sask me what are local companies of the various productive sectors of Equatorial Guinea they could  invite to France, or come and meet here, I have to recall them EG is  still in the early, embryonic stage, of its diversification. The same thing happens with the university movement I have mentioned. I have scholarships to invite high level students to France here in our programs at my embassy, researchers, to benefit of research centers in the medical or biotechnology sectors.

My challenge here in the business sector is the same as in the university sector. It’s just getting started.

Let me give you an example: a few days before the Montpellier civil societies Summit, the French Development Agency, together with the French business sector, had invited a few hundred entrepreneurs from Africa, only on the business side. I did not have the opportunity to offer many places to Equatoguinean entrepreneurs because their visibility their surface, today is a bit small compared to that of neighboring African countries.

In a more practical way, starting with the seeds. When I spoke here with civil society ahead of Montpelliers’ summit, I could have selected artists, teachers … I decided to support two entrepreneurs from Equatorial Guinea, because it seems to me that you have to work with the entrepreneurial sector. It is something very concrete.

Another example : there is a program called “Women in Africa”; it has asked the French embassy to help it identify Equatorial Guinean women entrepreneurs to benefit from it. We managed to identify eight of them. We had trained one of them here, with the tools of the French Cooperation Service and the French institute in computer skills – hard and soft.

Another thing to support small businesses is to facilitate the discovery of Equatorial Guinea by PROPARCO.

PROPARCO is a public agency, which works with public money to support the private sector. The two Equatoguinean entrepreneurs who travelled to Montpellier on October 8, have had a chance to introduce themselves to representatives of PROPARCO. I am happy to say that, in 2021, thanks to these seed efforts, Proparco has started to have a better understanding of the local banking sector, and initiated a financial support for landing money to small “start up” business. It does so through local banks, which is also a way to structurally reinforce local capacities. I am also happy to say Proparco is going to make a first visit to Equatorial Guinea in 2022. In order to have a direct flavor of the challenges and opportunities… I discussed this with the Secretary of State Treasury, Mrs. Milagrosa Obono, few days ago.

President E. Macron made sure PROPARCO has a 3,5 billon € budget 2018-22 to support SMEs  in Africa. It is a program, called “Choose Africa”,  that president Macron put in place responding to African civil societies expressing their desire to receive direct support because they represent also the dynamism of the continent, and its future. Ecuatorial Guinea is one of the few countries of Africa where the program has not, yet been implemented.

The reason is once again that PROPARCO works through the local banking sector, thus supporting it by the same token. It so is that the local banking sector here faces multiple challenges according to international business. So Proparco asked the French embassy to put it in touch with the adequate banks here, and the local SMEs I can identify. Now these SMEs must prove they genuinely have a business model, that  they really exist and not just “on paper”.

Through its visit in 2022, PROPARCO will acquire a firsthand picture of the local banking system. Because the idea of ​​PROPARCO with ”Choose Africa” financial program, is to support small businesses through the local banking system. That is, to collaborate with the banks here, to help them enhance their technical competence, landing capacity, banking ratios, compliance with local, BEAC and international regulations…

It will also be an opportunity for PROPARCO to see these entrepreneurs, who are just starting out, but who really exist and my hope is that we are starting down this path when PROPARCO will be able to be here, as in other countries,. The whole process will take two or three years; but you have to take into account the starting point. The reality is that other African countries which are way ahead in benefiting from Choose Africa, have prepared themselves a few more years ahead.

Dreams Talks: Please do describe your stay so far in Equatorial Guinea and your impression of the people

Ambassador Brochenin: Very attractive. With many challenges. An energy I did not expect, in a fairly small country. For me, this energy comes from the special identity I mentioned earlier and Equatoguineans should be proud of it. Equatorial Guineans are realizing it is their identity that give them a special strength in comparison with that of the neighbors. Here, as an ambassador, what I like the most is traveling to discover the country and its people. With Covid-19 it has been difficult;  sanitary regulations must be respected. What I like is traveling to Bata, traveling to Mongomeyén, Mongomo, Djibloho, Riaba and talking to people. Talk to the officials who have the ability to create the environment of attractiveness and talk to people, understand where theycome from. We are fortunate to be here as ambassadors for France, in a country that welcomes others. Equatorial Guinea is a Spanish-speaking country, which decided to join the Francophonie, which decided to join the Portuguese world. In other words, a country that is opened to other cultures, to its environment, to Africa and the world.

France is here with two international schools, one in Bata and one in Malabo, with hundreds of pupills who are the future of the country : 60% to 80% of them are Equatoguinean or African. We are investing this year in the French cultural Institute of Malabo to increase its internet capacity and we will also be able to offer distance learning. I would like to find ways to partner even more with Dreams Hub for instance. We have to invest in the connection and then in the training and everything that is digital. There are many challenges, but a lot of joy to work here.

Dreams Talks: Finally, what is your advice to Equatorial Guineans entrepreneurs?

Ambassador Brochenin: Keep believing in yourself, invest in yourself. The true riches are within. Help yourself and “heaven” will help you as is said in France; first one has to rely on himself and work hard, take his own responsibilities; then you will see, others will lay a hand, everything will come.

Equatoguineans are trusting in themselves, they are investing in schools, in universities, in the new economy, in new sectors and the world will find out. The world invites Equatorial Guinea. The world comes to discover. The world invited Equatorial Guinea to Montpellier. PROPACO will come here, support and enabling business environment and in a few years more French entrepreneurs will invite the Equatoguinean entrepreneurs and vice versa. Do hard work and believe in yourself.

Thank you very much for your time H.E, we hope to have you again soon.

Dreams Talks by Dreams Hub (Equatorial Guinea) is a project that was born with the intention of articulating a network of organizations and prominent people in the business, professional and cultural field, to foster a cultural movement that values the importance of Sustainable Leadership, as a basis for manage uncertainty, prioritizing the management of values, as a fundamental pillar of any society.

The conversations/interviews of key African and World leaders, will analyze and reflect on topics that will help shaping a better Africa, with an ultimate goal; the practice of futurism as a lifestyle. Giving priority to how our actions will impact the future of next generations, on our planet and universe.