The death toll from four explosions that rocked a military camp in Equatorial Guinea and surrounding areas rose to 105 with the discovery of seven more corpses, state television said Tuesday. 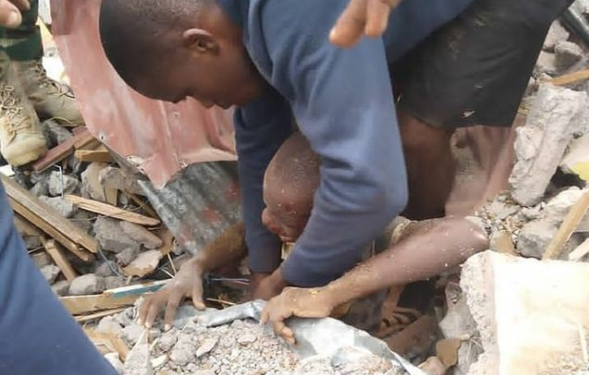 A total of 615 people were injured in Sunday’s accidental blasts at the Nkoa Ntoma camp in the country’s economic hub Bata, which devastated buildings at the compound and houses in surrounding districts.

President Teodoro Obiang Nguema, who has ruled the oil-rich country with an iron fist for 42 years, once again blamed the military for “negligence” in stocking ammunition so close to residential areas.

He has previously spoken of stubble-burning by local farmers setting off the tragedy.

On Monday, it said more than 60 survivors had been found trapped under debris, including two children aged three and four.

TVGE has shown images akin to a war zone, with rescue workers and civilians struggling to remove bodies from smoking ruins.

President Obiang on Tuesday said the officers in charge of the camp, which houses special forces and gendarmes and their families, had “been careless”.

Dynamite is normally “stocked very far from people and kept underground”, he said.

On Tuesday, residents said Bata was calm but they feared more blasts were possible.

“People continue to send their families to villages in the interior of the country because they think that Sunday’s explosions were a warning and the worst could still happen,” Bata resident Pastor Oyono told AFP by phone.

Another resident, Mba Mambiang, said “we are still in shock. We are also still afraid.”

The only Spanish-speaking country in sub-Saharan Africa, Equatorial Guinea is one of the most closed-off nations on the continent.

Bata is home to 800,000 of the country’s 1.4 million people, most of whom live in poverty despite the country’s oil and gas wealth.

The capital is Malabo, on the island of Bioko.

Its ruler Obiang is the world’s longest-serving sitting president and is frequently accused by rights groups of abuses.

Adding to the difficulty in understanding the full scale of the tragedy, air and sea links have been shut off for weeks due to coronavirus restrictions.

Only military and government aircraft have made the trip over since the explosions.

The president has meanwhile called for foreign help to address the tragedy.

Spain, the former colonial power, announced that an aid plane will leave Madrid on Wednesday with drugs and medical equipment.

The United States embassy said Washington is sending experts to help with damage assessment and reconstruction.