The entrepreneurial spirit is well and truly alive in Equatorial Guinea as the first edition of BANGE IMPULSA came to an end after five months of a rigorous process, involving over 600 applications from existing and prospective businesses. 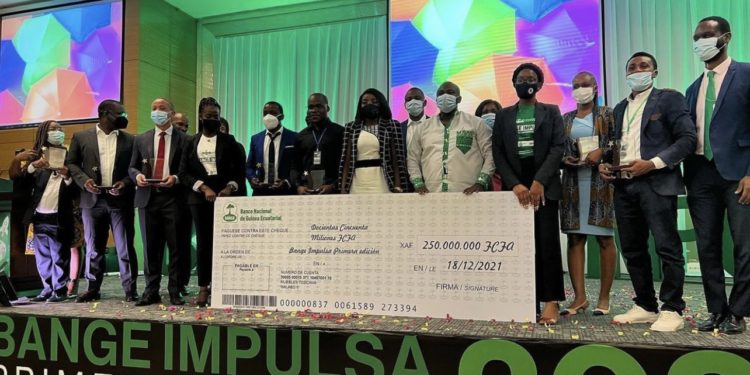 The National Bank of Equatorial Guinea (BANGE), have stimulated the nation’s small and medium enterprises with 250M XAF to be given to the 10 winners from the inaugural edition of BANGE IMPULSA. In what was a five months process, having started in August 2021, more than 600 applications got into the first round and were then tasked with creating a minimum viable product to take to market for research and gauge acceptability where possible.

The third stage which was the selection of the final 15 who got to pitch to a jury and invited guests. Importantly, in between the second and third phases, the applicants were admitted into the BANGE Business School in partnership with the Universidad a Distancia de Madrid (UDIMA). The winners of the BANGE IMPULSA would also get into the institution’s accelerator program.

It was a great day of celebrating some of the entrepreneurial talents the country can boast of as 15 young men and women trooped to the stage to pitch their businesses and ideas to a grand jury consisting of some of the most successful business men and women in the country.

Nerves, tension, excitement, doubts, great pitches and excellent communication were some of the emotions and characteristics noticed on the day from the participating entrepreneurs. Businesses ranging from agriculture to industrialization to technology, education and health-tech, were all on display.

At the end of the day, 10 of the 15 businesses were eventually announced winners after much deliberation by the jury on the day. The winners are:

The National Bank of Equatorial Guinea (BANGE) stated it will continue to support small and medium enterprises, to stimulate the continued growth of the economy. It also went further to say the winners now have an important job to do in making their businesses a reality, encouraging them to work harder than ever.

The second edition of the BANGE IMPULSA will start soon and the public is encouraged to watch out for it and register their interests once it starts.

Dreams Hub contributed to this article