Brussels is reportedly working on plans to hit Russia’s currency operations, trade, and access to technology in the case of conflict with Ukraine 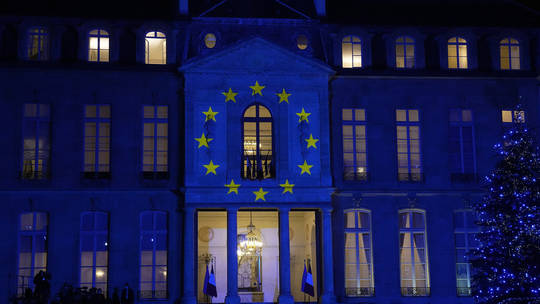 The EU is currently working on a package of sanctions that would curb Russia’s ability to convert currency, impose trade bans, and restrict access to “key technology” in the event Moscow orders an invasion of Ukraine, Bloomberg has reported on Tuesday, citing officials close to the process.

Cutting the country off from the SWIFT international payment system and placing sanctions on its energy exports were said to still be on the table as well.

Western nations have developing a response to what they say could be an imminent invasion of Ukraine in recent weeks, with a number of leaders sounding the alarm over a purported buildup of troops and military hardware on the shared border. Moscow has repeatedly denied it has any plans to attack its neighbor and insisted NATO is inflaming tensions.

However, according to Bloomberg, EU member states are still debating over the specifics of the plan and are even divided on what would constitute ‘an incursion’ into Ukraine, though there is reportedly agreement that restrictions should be automatically triggered if troops were to cross the border.

As well as an all-out a military attack, Brussels is also said to be looking at putting responses in place in the event cyberattacks, the “limiting of gas supplies,” or attempts to destabilize the government in Kiev.

The Financial Times quoted an EU official who confirmed that further work was needed to “get absolute clarity” among the member states on what could trigger sanctions.

US Secretary of State Antony Blinken told CNN on Sunday that Washington will hit Moscow with “severe” restrictions if Russian troops enter Ukraine.

Officials in Moscow, meanwhile, have warned that sanctions will not force Moscow to back down on its policies, and that the country will find ways to reciprocate in kind.

Russian and Western diplomats have held several rounds of talks this month, including a meeting between Blinken and Russian Foreign Minister Sergey Lavrov in Switzerland, to discuss a series of security guarantees that Moscow says would help de-escalate tensions. Among the proposals is a demand that Ukraine be barred from joining NATO and that the bloc refrain from military activity inside the borders of former Eastern Bloc states.

NATO Secretary General Jens Stoltenberg has said the requests are unacceptable, but that the two sides can still work to reduce the risk of conflict.