FIFA president Gianni Infantino has attempted to clear up controversial comments he made that appeared to suggest a biennial World Cup could help reduce 'death in the sea' among African migrants. 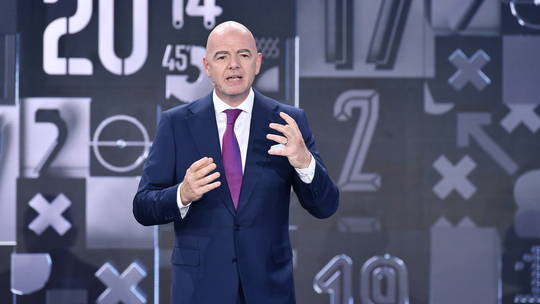 Releasing a statement on Twitter, the Italian denied that his intention had been to directly link more frequent editions of the FIFA showpiece event with preventing loss of life among refugees.

“Given that certain remarks made by me before the Council of Europe appear to have been misinterpreted and taken out of context, I wish to clarify that, in my speech, my more general message was that everyone in a decision-making position has a responsibility to help improve the situation of people around the world,” read a message from the football boss.

“If there are more opportunities available, including in Africa, but certainly not limited to that continent, this should allow people to take these opportunities in their own countries.

“This was a general comment, which was not directly related to the possibility of playing a FIFA World Cup every two years.”

Infantino made his original comments while attending a Council of Europe parliamentary assembly session on Wednesday.

Discussing his ‘Future of Football’ strategy which concentrates on halving the World Cup’s frequency from four to two years, he offered that Europe does not need additional tournaments as “the best players” currently ply their trade on the continent.

“But if we think about the rest of the world, and the vast majority of Europe that doesn’t see the best players or participate in the top competitions, then we have to think about what football brings, which goes beyond the sport,” he said.

“This topic is not about whether we want a World Cup every two years, but about what do we want to do for the future of football. If we think about the rest of world, and the vast majority of Europe, then we have to think about what football brings,” Infantino claimed.

“Football is about opportunity, about hope, about the national teams. We cannot say to the rest of world: ‘Give us your money, but watch us on TV’. We need to include them.”

Yet in the most criticized part of his speech, Infantino said: “We need to find ways to include the whole world to give hope to Africans so that they don’t need to cross the Mediterranean in order to find maybe a better life but, more probably, death in the sea.

“We need to give opportunities, to give dignity. Not by charity but by allowing the rest of the world to participate.

“Maybe the World Cup every two years is not the answer,” Infantino admitted.

“We will discuss what the best way is to be more inclusive, not just to speak about saying no to discrimination, but to actually act in exactly that direction. By being more inclusive. By bringing everybody on board. By trying to give opportunities, hope, and dignity to the entire world,” he concluded.

After the message was taken to mean that Infantino was linking reduced migrant deaths to his plan for World Cups to be hosted more often, the chief executive of Football Supporters Europe Ronan Evain asked “how low can Infantino go?”

“Instrumentalising death in the Mediterranean to sell his megalomaniac plan is beyond words,” Evain tweeted.

“My colleagues at Human Rights Watch interview refugees around the world pretty much every day,” said the group’s European media director, Andrew Stroehlein, also on Twitter.

“We write reports about the reasons – the abuses, the hardships – that forced them to leave their homes. They never mention the timing of World Cup tournaments.”

My colleagues at Human Rights Watch interview refugees around the world pretty much every day.

We write reports about the reasons – the abuses, the hardships – that forced them to leave their homes.

They never mention the timing of World Cup tournaments. https://t.co/HpsHvBLX40

Also on Wednesday, after UEFA received Council of Europe backing for its future vision of the game, president Aleksander Ceferin said that “European institutions and European football – as well as the European sports movement – stand firmly united behind our values and solidarity-based model.”

“There is no room for interpretation or negotiation. It’s ‘No’ to selfish super leagues and ‘No’ to extravagant World Cup proposals,” Ceferin stressed.