President Macron, has marked the start of his country’s presidency of the EU by calling for a “frank” dialogue with Russia, which he deemed necessary for building a new rules-based “European order.” 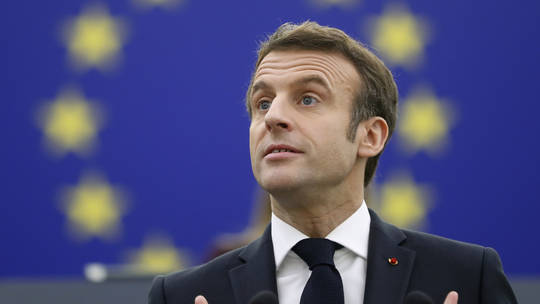 “Our continent’s security requires strategic rearmament of our Europe as a force of peace and balance, particularly in our dialogue with Russia,” Macron said in a speech to the European Parliament in Strasbourg on Wednesday.

He explained he has been making this point “for several years.”

“Both for us and for Russia, for the sake of the security of our continent which is indivisible, we need this dialogue,” Macron said, adding that it should be “a frank and demanding dialogue in the face of destabilization, interference and manipulation.”

According to the French president, cooperation with Russia must be based on principles and rules “to which we agreed and which we acted not against, not without, but with Russia thirty years ago.”

This new system, Macron argued, should be free of threats, coercion, and spheres of influence, and would give states a free choice when it comes to the membership of organizations or security arrangements, while guaranteeing their territorial integrity.

He suggested that this “new order of security and stability” should first be discussed within the EU, then within the NATO framework, before being proposed “for negotiation with Russia.”

He also said that France would continue to work with Germany within Normandy format to find a “political solution” to the conflict in eastern Ukraine, which, in his words, “remains the source of the current tensions.”

Macron’s latest rhetoric sounds different from the stance of the US and the NATO bloc it dominates. Growing tensions between Russia and Western countries over the situation in Ukraine were not resolved during a series of security talks that took place, last week, between diplomats from Russia, the US, and the 30-member military pact.

Moscow has requested written guarantees that the bloc will not expand further eastwards. Meanwhile, American intelligence services, and the countries’ popular media, have been pushing allegations of a supposed imminent Russian invasion of Ukraine. The Kremlin has denied these reports, calling them misinformation.