Friendship: Rwanda-Israel marking one year of the new embassy

The Republic of Rwanda and the State of Israel have enjoyed, over the years, a special, strong and fruitful relationship. In recent years, there has been an increase in high-level state visits between the countries. 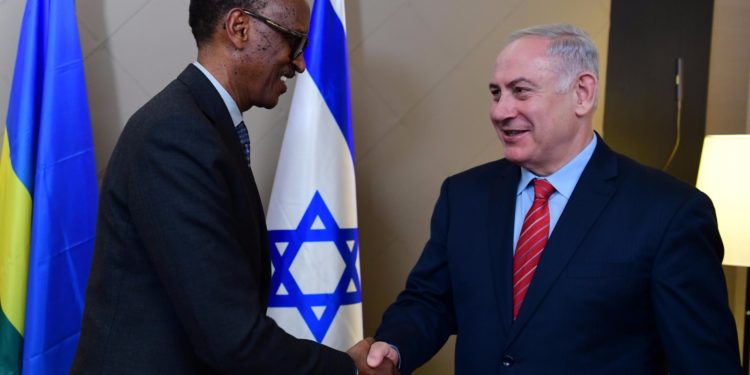 May 1st marks one year since Israel opened a new embassy in Rwanda. The new office was opened in a bid to strengthen existing diplomatic ties between both countries and promote bilateral relations between Israel and Rwanda in all areas based on underlying shared values, interests and challenges.

I am privileged and honored to be the first Israeli Ambassador to Rwanda with residence in Kigali.

My embassy spearheads these bilateral initiatives launched to boost the ongoing relations between the two states sister countries in areas such as education and health, academia, women empowerment, science and technology, innovation and agriculture.

In Agriculture, a Center of Excellence in Agriculture, under the auspices of MASHAV – Israel’s Agency for International Development Cooperation – was inaugurated and is based in Murindi.

The centre helps Rwandans widen their knowledge in horticulture.  About 170 students are given internship/scholarship opportunities annually in Israel to study modern agriculture and work with Israeli farmers.

In a move to increase tourism between the two countries and boost commercial relations between the business communities, the newly established embassy facilitated and assisted RwandAir, the country’s national carrier, to launch its direct flights to Israel, Tel Aviv in June 2019.

The Information and Communication Technology and innovation sector deserve a special attention, when Rwanda looks at Israel as a role model in creating an eco-system for innovation and entrepreneurship and Israel is keen to share its experience in these areas as well as cyber, space and security.

Delegations and individuals were visiting each other and now meeting on Zoom.

Rwanda shares a lot of similarities with state of Israel and offers a lot of ground for mutual cooperation, both with histories largely defined by genocide, the 1994 Genocide against Tutsi and Holocaust targeting Jews in the 2nd World War. From these scars, emerged courage and strength to work hard during the resilience process.

Like Rwanda that is landlocked, Israel is a thriving, vibrant and innovative society, home to over nine million citizens from diverse ethnic, religious, cultural and social backgrounds, has emerged from the desert sands with no natural resources, and has managed to beat the odds and become an unprecedented global leader in innovation.

On the 72nd Anniversary of its Independence this week, the State of Israel continues to believe that partnerships at the bilateral and multilateral levels is the catalyst for the continued journey for peace and development.

During these difficult times as the world fights the COVID-19 pandemic, the Embassy of Israel in Rwanda continued to work closely with Rwanda to fight this pandemic, by donating medical equipment, dry food and made-in-Rwanda masks to its citizens, and will continue to support critical areas ranging from health to education and sport, food security and agriculture.