A 400 Level Zoology student of Federal University of Agriculture, Abeokuta, FUNAAB, Seyi Akinade, allegedly took his life by drinking a substance suspected to be sniper over $20,000 debt. 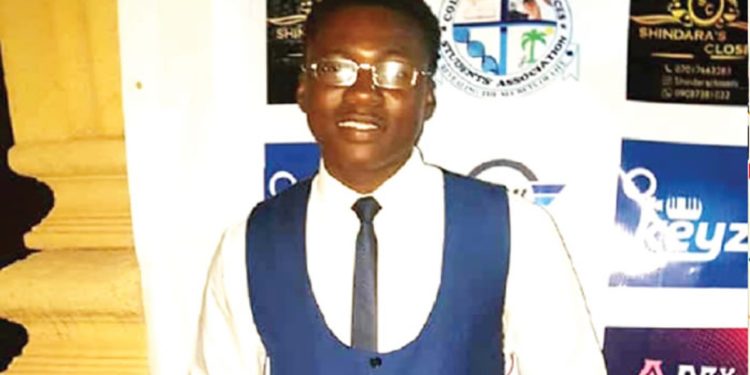 It is not yet clear how the debt, approximately N7 million, was incurred and whom he owed such staggering amount of money being a student, but in a post on his Twitter account, Akinade revealed a heart that was overwhelmed by frustration, helplessness and despair following the alleged unceasing harassment and torture by Special Ant-Robbery Squad, SARS. Some of the messages on the twitter handle of the deceased read: “And my life has been very shambled.

I have receipts for everything I said on air in case anyone thinks I’m lying. Suicide has been the only thought on my mind every day. So in case I hurt myself and anyone is curious as to why I did it. “They didn’t say anything and they threatened to waste me if I didn’t stop asking silly questions. We were handcuffed like armed robbers all 17 of us, we were squeezed into a small car like goats to be slaughtered and from Abeokuta, we were taken to Ibara Police station. “

Immediately we got there, I decided to plead with who was in charge that I had a presentation in school the next day that they should please let me go early because as at that time, it was 12 in the midnight already. He said I will pay 200k. Ha! For what?  “I told him that I am not a fraudster but a forex trader. He went through my phone and my friend’s phone. Nothing was implicating there, except for the bank alerts and that money was not even mine. I told him they were investors’ money.

“I guess it’s goodbye now, no one heard my cry for justice and this had to happen, ha-ha, bye world.” He allegedly committed suicide on Wednesday when he could no longer live with the steady ‘diet’ of orchestrated torture served him repeatedly by SARS.

Announcing the death of Akinlade on Twitter, his stepbrother, Toye Salawudeen, said the family members were unaware of the deceased’s ordeal until after his demise. The deceased had revealed on his Twitter handle, @Akinadeoluwa17 that he plunged into $20,000 debt after he was arrested by SARS operatives, who allegedly extorted him.