Kenyatta and Wang also discussed a wide array of bilateral and multilateral subjects of mutual interest, including regional peace and security, as well as the global fight against COVID-19. 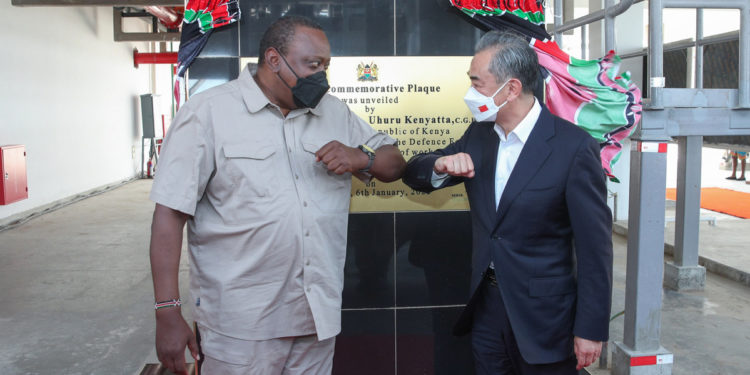 The $353 million offshore Kipevu Oil Terminal in the coastal city of Mombasa, the largest of its kind in Africa, is funded by the Kenya Ports Authority and implemented by the China Communications Construction Company. Construction of the 770-meter-long jetty is currently 96 percent complete.

Wang said the project is a reflection of sincere China-Africa friendship that has withstood the test of time, and he foresees the bright future of modernization through joint efforts.

“More than 600 years ago, Chinese navigator Zheng He leading the most powerful fleet visited Mombasa three times. He brought friendship and trust to Africa, rather than colonization or slavery,” he said. “Six hundred years later, following the footprints of Zheng He, Chinese engineers and technicians have arrived in Mombasa and Africa again and built the best roads, best railways and best oil and gas facilities for local people.”

Among major benefits arising from the new facility, which is also a Belt and Road Initiative project, will be a reduction in demurrage and costs of freight docking at the Mombasa port. “Once fully commissioned in a few weeks, we shall save close to $18 million that we pay because of demurrage,” Kenyatta said.

When the project is complete in April, the offshore facility will be able to load and offload sea tankers of up to 200,000 deadweight tonnage carrying all categories of petroleum products including crude oil, white oil and liquefied petroleum gas, thus greatly increasing supply of oil to the country.

The terminal is expected to increase the Mombasa port’s capacity of handling transit petroleum products from the current 35,000 to 100,000 metric tons with the capacity to handle four vessels, according to the Kenya Ports Authority.

The new oil terminal facility will have four berths capable of handling six different hydrocarbon import and export products. It also has five subsea pipelines which are buried 26 meters under the seabed to allow dredging of the channel without interference.

Kenyatta commended Kenya’s partnership with China saying that the arrangement had helped deliver key development projects including the offshore jetty, the Standard Gauge Railway and the Nairobi Expressway, among others. He also thanked China for continuing to open up its market to Kenyan exports.

‘We do not need lectures’

“Our partnership with China is not a partnership based on China telling us what to do. It is a partnership of friends,” he said. “They were there ready to work and walk with us hand-in-hand and that indeed is what we call a friend. We do not need lectures about what we need. We need partners to help us achieve what we require.”

China and African countries have jointly built more than 10,000 kilometers of railway, nearly 100,000 km of roads, 1,000 bridges and 100 ports in the continent, in addition to large numbers of hospital and school construction projects, Wang said, adding that China is willing to make new contributions for a better future for Africa.