He was arrested in 2015 in the Democratic Republic of Congo and extradited to Rwanda in 2016 and has been on trial since; on charges including genocide, incitement to commit genocide, murder, and rape. 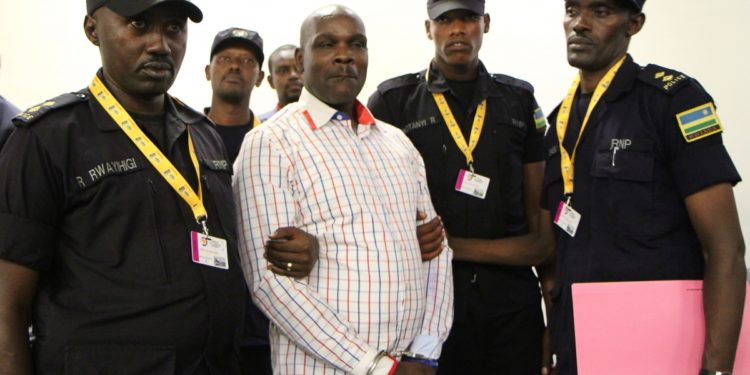 The High Court Chamber for International Crimes in Nyanza on Thursday, May 28, sentenced Ladislas Ntaganzwa to life in prison for crimes he committed during the 1994 Genocide against the Tutsi. Ntaganzwa, 58, was the Bourgmestre (Mayor) of Nyakizu Commune, now part of Nyaruguru District, during the Genocide.

Most of the crimes were committed from Nyakizu.

His trial has been handled by the High Court Chamber for International Crimes first in Kigali then to Nyanza where the court later found a permanent home.

However, on one occasion, the court relocated to Ryabidandi cell, Nyagisozi sector, Nyaruguru district, an area where Ntaganzwa is accused to have committed the crimes.

Prosecution accused Ntaganzwa of playing a big role in killing more than 25,000 Tutsis who had sought refuge at Cyahinda Catholic Parish.

During earlier hearings, a number of witnesses pinned Ntaganzwa to have played a big part in the Cyahinda Catholic Church attack which involved policemen, soldiers (brought by Ntaganzwa), Interahamwe militia, and Burundian refugees who killed the thousands of Tutsis that had sought refuge at the church.

In his defence, Ntaganzwa had said that he did not have authority to stop the genocide the area he was leading at that time, adding that he made no attacks no the church or anywhere else, despite the overwhelming evidence that pinned him.

The judge convicted Ntaganzwa on genocide, and perpetrating crimes against humanity including rape, but acquitted him of the crime of incitement to commit genocide.

He was subsequently condemned to life sentence, which is the highest sentence that can be prescribed by Rwandan courts.

Ntaganzwa was one of the nine people indicted by the International Criminal Tribunal for Rwanda (ICTR) but had not yet been arrested by the time the UN court closed shop in 2015.

In 2012, ICTR, as part of its completion strategy, decided to refer to Rwandan prosecution the case files of six of the nine major suspects who had remained at large.

The other three: Felicien Kabuga, Augustin Bizimana and Maj Protais Mpiranya would be tried by the International Residual Mechanism for Criminal Tribunals.

Kabuga was arrested in France this month and a few days later, it was confirmed that the remains of someone exhumed in the Republic of Congo belonged to Bizimana who had died in 2000.

Mpiranya is still on the run.