Russian President Vladimir Putin says his nation stands with China in the face of attempts to ‘politicize’ sport through actions such as diplomatic boycotts by some Western countries at the upcoming Winter Olympics in Beijing. 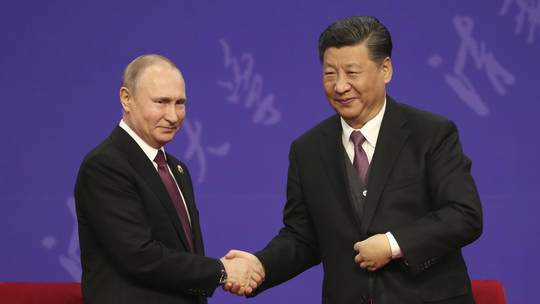 China is gearing up to host the Winter Games next month but the build-up has partly been characterized by a group of countries, spearheaded by the US, announcing they would shun the event at diplomatic level, supposedly in protest at Beijing’s human rights record.

Officials in Russia have decried those actions as a political sideshow aimed at undermining the sporting showpiece, and contrary to Olympic principles of unity.

Russian President Putin will be at the Games at the personal invitation of Chinese leader Xi Jinping, and stressed in an address to Russian athletes on Tuesday that the two nations are firmly united in their stance on boycotts by the likes of the US, the UK, Canada, and others.

“Together [with China], we oppose the politicization of sports and demonstrative boycotts. We support traditional Olympic values, first of all, equality and justice,” said Putin.

The Russian leader is set to attend the Opening Ceremony of the Games in Beijing on February 4, and will hold sideline talks with Chinese leader Xi.

“We will certainly outline new plans for interaction, including taking into account our agreements on holding the Years of Russian-Chinese cooperation in the field of physical culture and sport,” said Putin.

Russia is set to send a delegation of 221 athletes and 461 people in total to the Beijing Games, where the team will formally be competing under the banner of the Russian Olympic Committee (ROC) due to ongoing WADA sanctions.

Speaking to athletes via video-link, Putin said the whole nation would be behind them back home.

“As you know, in Russia we aren’t afraid of difficulties, they always make us even stronger, more united, self-confident. I’m convinced that all these qualities will be fully manifested in Beijing,” Putin said.

The Chinese capital will become the first city ever to welcome both the Summer and Winter editions of the Olympics, having held the former in 2008.

Russian officials have joined their Chinese counterparts in condemning the US and others for what they see as efforts to undermine Beijing’s hosting of the Games.

Earlier in January, the director of the Russian Foreign Intelligence Service said his agency had uncovered a plot by the US State Department to coordinate a multilateral effort to tarnish the Games.

“I must say that we have rather extensive information about a large-scale campaign by the US and its most odious, obedient allies to aggressively and maliciously interfere in the preparation process for the Beijing Olympics,” Sergey Naryshkin alleged.

“We are seeing their attempts to discredit the Olympic organizers in Beijing. The US State Department is playing the largest role here, coordinating all the anti-Chinese activities of NGOs and media.”