Local sources revealed the mangled remains of the victims, consisting of three men and one woman, were trapped in the e-hailing car. 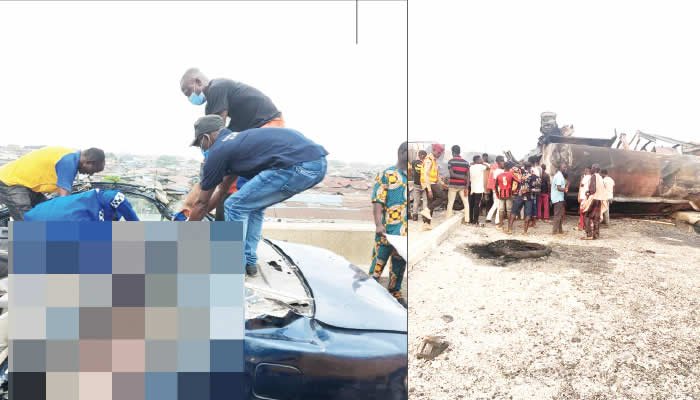 Africanian has learnt the first accident, which happened on Saturday, claimed the lives of an Uber driver and his three passengers.

It’s been gathered that the victims, who were in a Toyota Camry, were plying the Eko Bridge to navigate to their destination when the driver of a Lexus 300, Yusuf Ambali, lost control of his vehicle and rammed into the Camry.

The impact of the collision, which damaged both vehicles, killed all four occupants of the Camry.

However, Ambali was said to have escaped death just marginally.

Local sources revealed the mangled remains of the victims, consisting of three men and one woman, were trapped in the e-hailing car.

Emergency responders, who stormed the scene of the tragedy, were seen using equipment to pierce through the vehicle to recover the bodies.

The accident affected vehicular movement on the bridge, as traffic officials had a tough time managing the situation.

The state Police Public Relations Officer, Benjamin Hundeyin, said the driver responsible for the accident had been arrested, adding that efforts were on to identify the victims.