The federal government has ‘strongly advised’ residents of Lagos and Abuja to stay indoors as coronavirus (COVID-19) spreads. 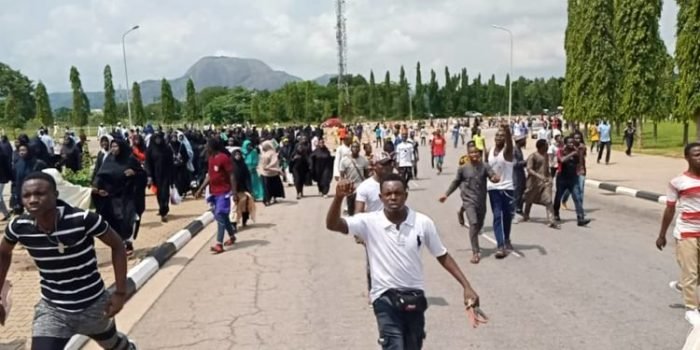 The Secretary to the Government of the Federation, Boss Mustapha, announced the stance of the federal government at a press briefing in Abuja.

“All Abuja and Lagos residents are strongly advised to stay at home, avoid mass congregation of any kind as well as non-essential outings, until further advice is given,” Mr Mustapha said.

The government, however, stopped short of ordering people to stay indoors, meaning residents of both states can still move freely, should they choose to.

Many economists and analysts have expressed doubts about the effectiveness of any stay at home directive as a large number of the estimated 19 million Lagos population earn their living daily in the informal sector. For such people, not going out daily could mean not having any means of survival as neither the state government nor the federal government has any palliative in such situations.

PREMIUM TIMES reported how the Lagos State Government earlier restricted public gatherings to a maximum of 20 people. The state tried to enforce the directive over the weekend, but many clubs, markets and others still remained open and ignored the directive.

Lagos has the highest number of COVID-19 cases (25 of the 36 confirmed across the country as of Monday evening). It is followed by Abuja which has six.

One of the COVID-19 patients in Abuja died on Sunday.

In his address, Mr Mustapha also announced the full closure of Nigeria’s land borders, days after the country announced it will shut all its international airports.

Read the full text of Mr Mustapha’s address below:

In furtherance of our ongoing engagement with the public and stakeholders through the Presidential Task Force (PTF) and the Honourable Minister of Health (HMoH), I have found it necessary to update you on recent developments regarding the management of matters arising from COVID-19 Pandemic.

2. Let me remind you that as at the time the Honourable Minister of Health (HMoH), briefed you earlier today, the numbers from the World Health Organisation (WHO), confirmed that the virus has covered 192 countries, reporting over 329,000 cases. In Africa, 42 out of 54 countries have reported cases while 48 deaths have been recorded.

3. In Nigeria 36 cases have been reported and one fatality has occurred. The first responders, particularly the National Centre for Disease Control (NCDC), continues to attend to reports received through telephone calls and other medium.

4. We commend Nigerians for stepping out to report and/or make enquires through the dedicated hotlines. Records show that on Sunday, 22nd March, 2020, over 4500 calls were received. This shows the high level of awareness amongst Nigerians.

5. The strategy of government is to focus on testing, detection and containment through contact tracking in order to minimize hugely, the possibility of community spread. We urge anyone experiencing the symptoms of the virus or has been in contact with anyone who has been suspected or tested positive to please report at the nearest medical facility or the designated center.

6. The Presidential Task Force (PTF) continues to monitor the global and domestic developments and has isolated Lagos and Abuja for particular attention in view of their population, mobility and number of cases already reported.