The Defence Headquarters has said troops’ offensive operation in the northern part of Nigeria has led to the killing of over 120 terrorists and the arrest of 50 others in three weeks. 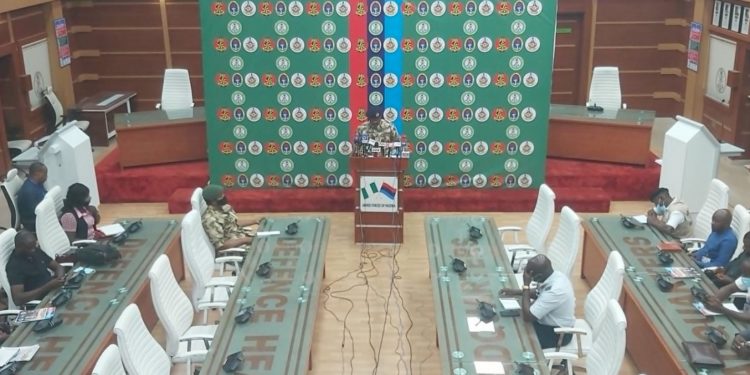 The Director, Defence Media Operations, Major General Bernard Onyeuko, who disclosed this during a briefing in Abuja, on Thursday, said a senior ISWAP commander, Mallam Ari, the Amirul Fiya in charge of Kirta Wulgo, and some foreign mercenaries fabricating Improvised Explosive Devices for the terrorists were killed during airstrikes in the period under review.

Onyeuko stated that the troops also destroyed ISWAP armory and warehouse, and arrested several terrorists, while assorted arms and ammunition were recovered in addition to gun trucks and other weapons.

In the North-West, Onyeuko said troops’ operational efforts resulted in the recovery of 40 AK-47 rifles, 90 rustled livestock, assorted arms and 340 rounds of different calibers of ammunition, 45 motorcycles and decimation of scores of bandits.

He added that the troops recovered 33 arms and 150 calibers of ammunition and 450 rustled livestock, among other items of security concern in the course of their operations.