In court, Rusesabagina was accompanied by his lawyers, David Rugaza and Emelyne Nyumbo who requested on his behalf that he is provisionally released. 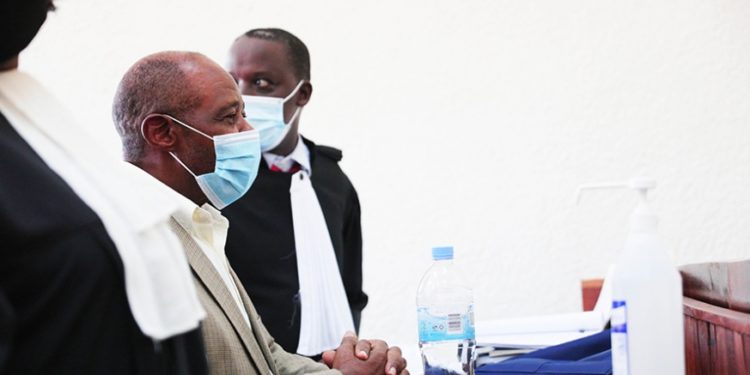 Terror suspect Paul Rusesabagina was on Monday, September 14, arraigned at Kicukiro Primary Court where he was charged with 13 counts related to terrorism.

The charges Rusesabagina faces are linked to activities of FLN, a militia group founded by a collective of outfits under an umbrella called MRCD, which he heads.

The militia group has previously made incursions into Rwanda in which several people were killed while others sustained injures and property destroyed or pillaged by the assailants.

Clad in khaki trousers, a jacket and a shirt without a tie, Rusesabagina did not say much during the session that lasted over an hour, other than confirming his identity.

During the hearing that was presided over by court president Dorothy Yankurije, Rusesabagina was charged with murder, terrorism, financing terrorism, arson, forming terror groups among others.

At the onset, Rugaza raised three objections, among them being the competence of the court to try the case.

The objections included the fact that Rusesabagina’s domicile in Rwanda is not in the jurisdiction of the court.

He also said that his client lives in foreign countries and was not in Rwanda to commit the alleged crimes.

However, Oscar Butera, the lead prosecutor said that being a foreign national does absolve anyone from crimes committed against Rwandans.

“Despite the fact that the suspect is Rwandan and has never renounced his nationality, we still try foreigners who commit crimes here,” Butera said.

The other objection was that Rusesabagina was being charged for crimes committed before the promulgation of the current penal law, which was enacted in 2018.

Meanwhile, prosecutors dismissed claims by the defence lawyers that much of the charges against him are invalid since they fall under the ambit of freedom of court.

“That is far from the truth. What does financing a terror group (which he himself accepts) have to do with freedom of expression?” Said Butera.

Following the submissions by both sides, the judge called for a break, saying court would deliberate on the objections by defence and rule at 13hrs.

If court determines they have competence to hear the case, they will proceed with the pre-trial hearing during which the suspect will take plea and ask for provisional release.

Rugaza has previously said that his client ought to be provisionally released, owing to the fact that the laws in Rwanda allows for this.

Rusesabagina, who has been a subject of an arrest warrant issued in 2018, was paraded before the media on August 31.