The current level-two lockdown will be moved to level one, starting from Sept. 21, Ramaphosa said in a televised address. 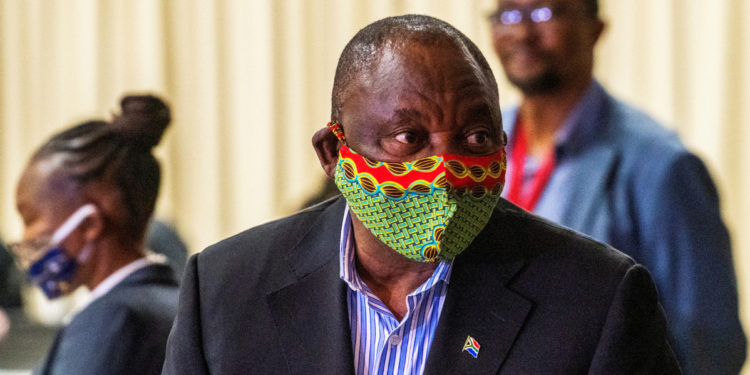 “Now, with the further progress we have made as infections have come down further, we are now ready for a new phase in our response to the pandemic,” he said.

With level-one restrictions, social, religious, political and other gatherings will be permitted, with the number of people less than 50 percent of the normal capacity of a venue, up to 250 people for indoor gatherings and 500 people for outdoor gatherings, the president said.

The maximum number of people attending a funeral is increased from 50 to 100, he said.

Venues for exercise, recreation and entertainment, such as gyms and theatres, which were limited to no more than 50 people, will now be allowed to accommodate up to 50 percent of their capacity as determined by available floor space, subject to social distancing and other health protocols, said Ramaphosa.

However, existing restrictions on sporting events remain in place, he said.

With the move to level one, South Africa will gradually and cautiously ease restrictions on international travel starting from Oct. 1, he said.

This is subject to various containment and mitigation measures which include restricting travel to and from certain countries that have high infection rates, he said.

On arrival, travellers will need to present a negative COVID-19 test result not older than 72 hours from the time of departure, he said.

When travellers have not done a COVID-19 test prior to departure, they will be required to remain in mandatory quarantine at their own cost, according to the president.

“In preparation for the re-opening of our borders, South African missions abroad will open for visa applications and all long-term visas will be reinstated,” he said.

Despite the further easing of restrictions, health protocols, such as washing or sanitising of hands, social distancing and mask-wearing, will need to be strictly observed, said Ramaphosa.

Although the country has made remarkable progress, a number of South Africans are still getting infected and some are losing their lives, he said.

By any measure, the country is still in the midst of a deadly epidemic, the president said.

“Our greatest challenge now — and our most important task — is to ensure that we do not experience a new surge in infections,” he noted.