The so-called “debt trap” in Africa, a malicious hype created by some people — Wang Yi

The Foreign Minister said China was ready to work with all friendly countries to help African nations speed up post-pandemic recovery and eliminate poverty and underdevelopment to create a better future. 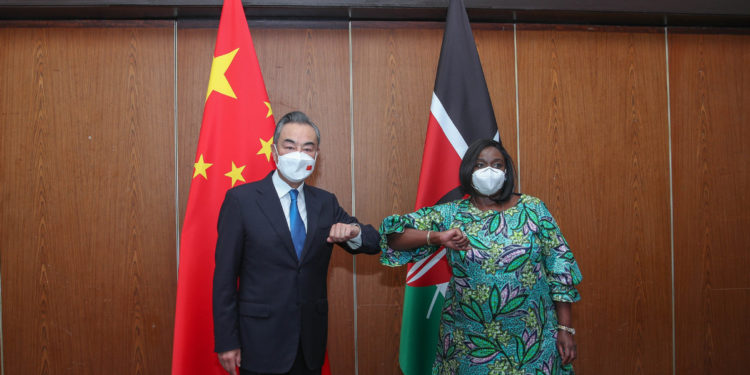 The so-called “debt trap” in Africa was not a fact, but a malicious hype created by some people, State Councilor and Foreign Minister Wang Yi said.

Wang refuted the allegation that China’s cooperation with Africa has created a “debt trap” when he jointly met the press with Kenyan Cabinet Secretary for Foreign Affairs Raychelle Awuor Omamo on Thursday.

The “debt trap” was an “utterance trap” created by those forces that did not want to see Africa speed up development, he said.

China-Africa cooperation was South-South cooperation and mutual support and assistance between developing countries, he stressed, adding China never attached any political strings in cooperation with Africa.

All China-Kenya cooperation projects have been scientifically planned and appraised in detail, which benefited Kenyan people and boosted Kenya’s national development and revitalization, Wang said.

According to Wang, 80 per cent of Kenya’s foreign debt is owed by multilateral financial institutions, and its debt to China is mainly concessional loans.

He emphasized that if there was any “trap” in Africa, it was the “poverty trap” and the “underdevelopment trap”, which Africa should get rid of as soon as possible.

Wang said China was ready to work with all friendly countries to help African nations speed up post-pandemic recovery and eliminate poverty and underdevelopment to create a better future.

“The so-called ‘debt trap’ in China-Africa cooperation confuses right and wrong, which has no credibility at all and will lose market in the world,” said Zeng Aiping, deputy director of the Department for Developing Countries Studies at the China Institute of International Studies.

It was intended to drive a wedge between the two sides and damage bilateral cooperation, he added.

Zeng said the groundless allegation in most cases showed what Western countries did to Africa yet China would not follow their steps and repeat their mistakes.

He noted the China-Africa cooperation was highly pragmatic pursuing win-win mutual benefit and common development. It was also inclusive for China welcomed international community to form synergies to help the continent, Zeng said.