The  State minister for Transport, Mr Fred Byamukama,  had earlier petitioned the President to intervene in the raging land crisis in the former lost counties of Buyaga and Bugangaizi in the greater Kibaale District. 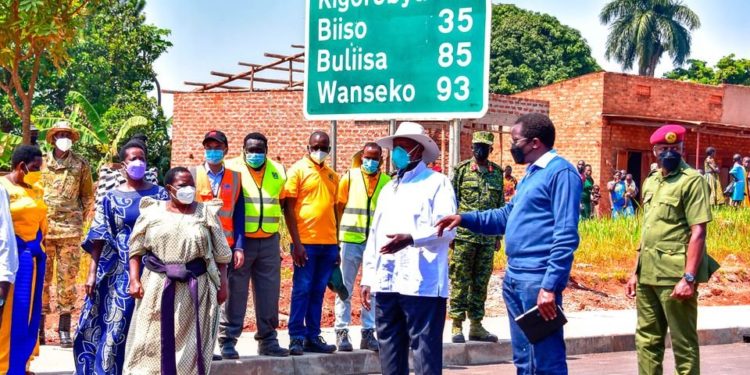 The commissioning ceremony was a pre-event ahead of the 36th National Resistance Movement (NRM)  liberation day that is commemorated every January 26.

“We have paid the debts of the roads in Bunyoro. We have worked on all major roads. We shall also work on the other few remaining roads,” President Museveni said while addressing Bunyoro leaders at Bwikya Mosque playground yesterday.

He said the government has constructed roads that will facilitate oil and gas developments and roads that are not linked to the sector.

He challenged leaders to mobilise the masses to take advantage of the roads to improve household incomes.

“The core of social economic transformation is homestead income. Once that is addressed, the rest of the needs are easy to address,” Mr Museveni said.

“You have worked on roads. We now request you to put more emphasis on solving land problems in the greater Kibaale because government has compensated some absentee landlords but others have refused to be compensated,” Mr Byamukama said.

The President directed  Prime Minister Robinah Nabbanja to handle the pending land issues in the region.

Ms Nabbanja, who promised to handle the assignment, appreciated the President for transforming Uganda and increasing the life expectancy of Ugandans through improved quality of life and health services. She tasked leaders to always monitor government projects in their areas and guide people to benefit from government programmes.

The premier  had earlier visited Hoima Regional Referral Hospital and found seven patients awaiting medical operation but the hospital had run out of blood. “Using the powers you gave me your excellency, I have directed the Ministry of Health to immediately bring blood to the hospital,” she said.