Uganda: Scientist makes ‘once in a lifetime’ insect discovery

The discovery in the Ugandan rainforest is a rare find, as the last recorded sighting of a leafhopper from a related genus was in 1969 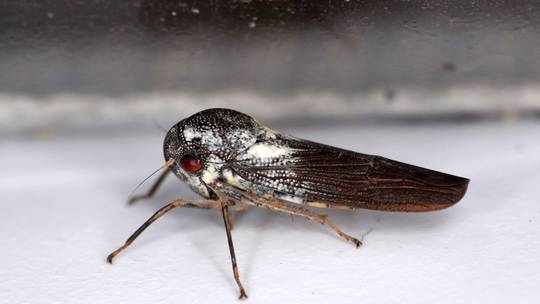 A new species of leafhopper, named Phlogis kibalensis, has been discovered in Uganda in what the scientist who found the insect called a “once-in-a-lifetime achievement.”

The newly-found species was reported in the Zootaxa journal on Friday by Dr. Alvin Helden of Anglia Ruskin University, who discovered the insect while conducting field work in Kibale National Park in 2018.

The insect, with a distinctive metallic sheen, pitted body and leaf-shaped reproductive organs, is a close relative of cicadas, but is a little smaller at just 6.5mm long.

Helden realized he had discovered a new insect when examining the leafhopper, as he saw the reproductive organs looked like “little leaves” that were “towards the tip of the structure.”

“To find this new species is a once-in-a-lifetime achievement, particularly as its closest relative was last found in a different country over 50 years ago. I knew it was something very special as soon as I spotted it,” Helden stated.

READ MORE: Saturn’s moon of Mimas is likely hiding an ocean under its surface where alien life could be found: scientists

Leafhoppers are “rarely found,” according to Helden, with the last reported sighting of a member of the genus back in 1969. The difficulty of finding them has meant that “their biology remains almost completely unknown” to researchers.

Highlighting the impact of deforestation on species, Helden claimed that, while wildlife are able to thrive in places like Kibale National Park, they are struggling outside the national park as rainforest is cleared. “Rare species could be living anywhere, but deforestation means it is inevitable that we will be losing species before we have discovered them,” Helden said.