Two people are admitted to hospital after they were shot by police officers deployed to enforce President Museveni’s suspension of public transport in a bid to prevent the spread of coronavirus. 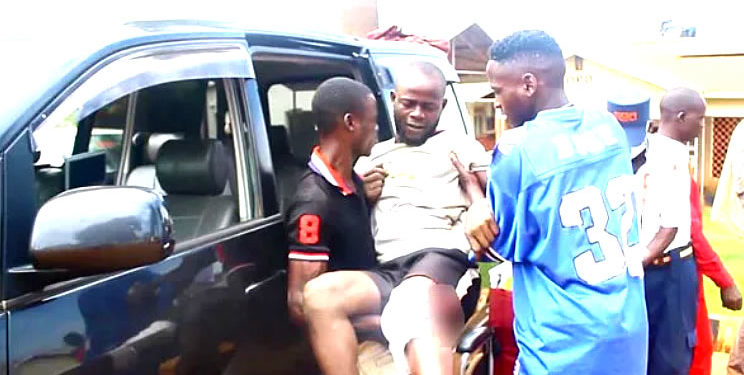 Alex Olyem and Kasim Ssebude who are currently admitted to Mukono general hospital were shot while riding on a motorcycle in Goma Division Mukono Municipality.
Oryem was shot in the leg while Ssebude was shot in the stomach. The two construction workers were travelling from Seeta to Namugongo when they were intercepted by police.

The president said boda boda cyclists would not be allowed to transport passengers.
“As we were going to work, we met two officers who blocked us and blamed us for being two on a motorcycle. When we tried to ask the officers what offence we had committed, they just started shooting at us,” Oryem said.
They said the police officers first shot two bullets in the air before shooting at them.

Kampala metropolitan police spokesperson, Mr Patrick Onyango, said the two were shot after they allegedly tried to attack a police officer.
“After police stopped them, they tried to attack our officers. He first fired warning shots in the air. People should not defy presidential directives aimed at preventing the spread of coronavirus in Uganda,” he said.
Uganda has so far confirmed 14 cases of coronavirus pandemic which has wreaked havoc in different parts of the world.