The United Kingdom would gain massively from a free-trade agreement with India, but will also expose its economy to unprecedented competition, according to a report from the Resolution Foundation. 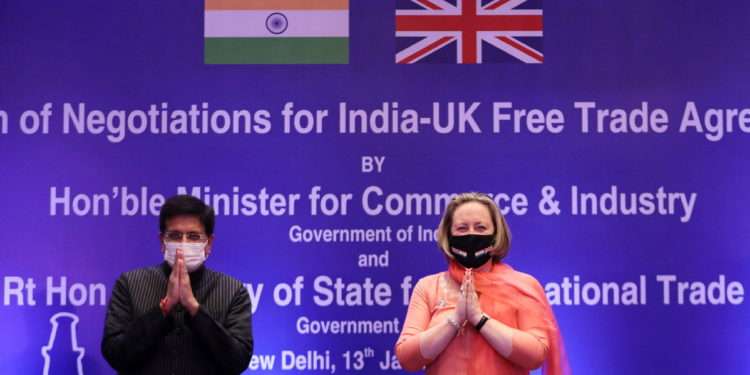 The think tank, which pushes for improved living conditions for people in the UK on low and middle incomes, said a deal with the world’s second most populous country could offer an upside similar to an FTA with the United States.

Sophie Hale, principal economist at the Resolution Foundation, said the Comprehensive and Progressive Agreement for Trans-Pacific Partnership, or CPTPP, could also be eclipsed by the benefits of a deal with New Delhi.

“While much of the focus has concentrated on becoming the first European country to join the huge CPTPP region, the far bigger potential economic gains and risks lie in more trade with the huge, rapidly growing, but still relatively closed Indian economy,” Hale was quoted by The Guardian as saying.

“Trade liberalization with India is expected to boost UK manufacturing in the short term, but could also benefit business services, where UK firms already enjoy a competitive advantage, and where demand is set to soar.”

But the Resolution Foundation said the UK could benefit more from an FTA with India because it would give London “first-mover “status in the country.

But the report cautions that the UK’s vibrant business services sector could be exposed to unprecedented competition from Indian companies through an FTA, with them potentially being undercut and outmaneuvered by their Indian rivals.

The Daily Express newspaper said India has an increasing thirst for business, telecommunications and computer services, with its demand for imported business services alone expected to triple by 2030.

London has been talking to New Delhi for some time about a potential free trade deal and Anne-Marie Trevelyan, Britain’s international trade secretary, continued that conversation earlier this month when she met with Shri Piyush Goyal, India’s minister of commerce and industry.

Sky News reported an FTA with India would fit with the UK’s avowed mission of increasing trade with Asia in the wake of it leaving the European Union.