United Kingdom PM told to go ‘in the name of God’

PM Boris Johnson was roasted in Parliament by his former ally David Davis, who demanded that Johnson “shoulder the responsibility” of his actions and resign. Meanwhile, Tory MPs are losing confidence in the PM. 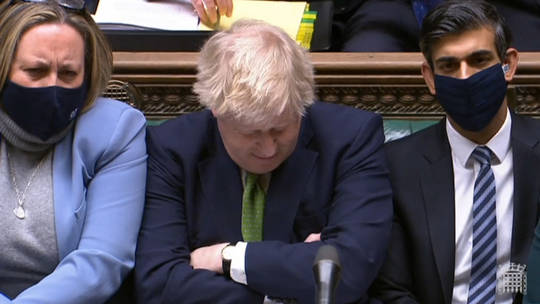 Some 20 Tory MPs submitted letters of no confidence in Johnson’s leadership on Wednesday morning, according to Sky News, and the Prime Minister faced more direct calls to resign during Prime Minister’s Questions shortly afterwards.

David Davis led the charge against Johnson. An ally of the PM during the Brexit process, Davis delivered a dramatic speech calling on Johnson to step down.

“I expect my leaders to shoulder the responsibility for the actions they take,” Davis declared. “Yesterday, he did the opposite of that,” he added, referring to Johnson’s claim on Tuesday that “no-one warned” him that a party held at Downing Street during the first coronavirus lockdown of 2020 was in breach of his government’s own rules.

The party, a “bring your own booze” event in the garden of Number 10, was one of several that Johnson has been accused of hosting while ordinary Britons were forbidden from such gatherings.

“You have sat too long here for any good you have been doing,” Davis said. “In the name of God, go!”

Davis’ put-down drew cheers and jeers from the benches, as Johnson responded that he takes “full responsibility for everything done in this government and throughout the pandemic.”

Johnson has ruled out resigning at least before the publication of a report into the Downing Street parties by senior civil servant Sue Gray, due next week. In the meantime, Johnson is reportedly working on a plan to save his job by reshuffling his cabinet and dispatching ministers to praise the “difficult choices” he made during the pandemic to the media. The plan has reportedly been dubbed “Operation Save Big Dog.”

Aside from Davis’ condemnation and the no-confidence letters that poured in on Wednesday morning, Johnson also suffered a major blow when Conservative MP Christian Wakeford defected to the Labour Party earlier in the morning, saying that only Labour could deliver “an alternative government that this country can be proud of, and not embarrassed by.”