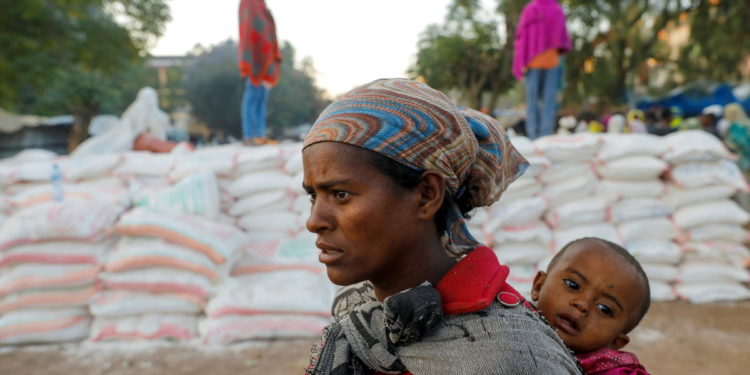 The WFP reported 13 percent of Tigrayan children under age 5 are malnourished, as are half of all pregnant and breastfeeding woman according to WFP Spokesman Tomson Phiri who went on to say “lack of proper nourishment is leading to low-birth weight, stunting, and maternal death”.

He said people who cannot feed themselves are resorting to extreme coping measures to survive.

“Diets are increasingly impoverished as food items become unavailable and families rely almost exclusively on cereals while limiting portion sizes and the number of meals they eat each day to make whatever food is available stretch further,” Phiri said.

In the neighboring Amhara region, hunger has more than doubled in five months because the region bore the brunt of recent fighting between the Ethiopian Government’s military forces and Tigray forces, the survey indicated.

In Afar province, the fighting has reportedly led to tens of thousands of men, women and children being displaced in the last few weeks.

Intensified conflict on the Tigray-Afar border in recent days has uprooted more than 220,000 people, exposing them to deeper hunger, the Afar regional government recently announced.

WFP estimates on average, crisis-affected families in northern Ethiopia were getting less than 30 percent of their caloric needs in the past months, pushing people deeper into crisis.

WFP Regional Director for Eastern Africa,Michael Dunford said the humanitarian assistance to the people of northern Ethiopia should be scaled up and “they need it now”.

According to him, WFP is doing all it can to ensure convoys with food and medicines make it through the frontlines, but no convoy has reached Tigray since mid-December.

“If hostilities persist, we need all parties to the conflict to agree to a humanitarian pause and formally agreed transport corridors, so supplies can reach the millions besieged by hunger”, he warned.

Despite the many challenges, the WFP reported it managed to deliver food aid to nearly four million people across northern Ethiopia since March.

Constant humanitarian food assistance will be necessary throughout 2022, the UN agency said.