Local journalists exposed how Moyo allegedly chose the two-month old company to sell medical supplies to the government at inflated prices that included face masks for £22 each. 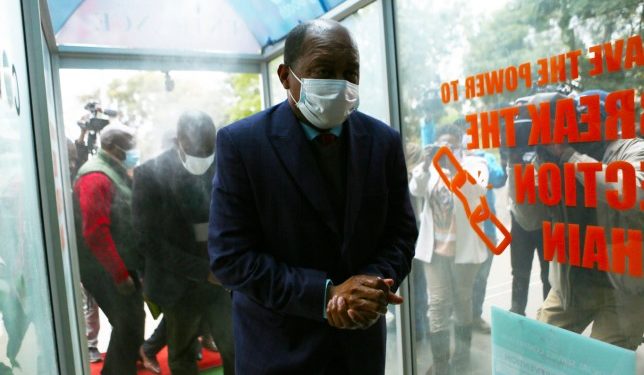 The country’s anti-corruption agency arrested Obadiah Moyo on Friday as the scandal rocked the country and played out on social media. A $20m (£16m) contract was awarded to Hungary-registered firm Drax Consult, allegedly without going through proper processes.

Local journalists exposed how Moyo allegedly chose the two-month old company to sell medical supplies to the government at inflated prices that included face masks for £22 each. ADVERTISEMENT Top Articles by Metro Hottest day of the year expected in 30°C heatwave next week READ MORE SKIP AD The government cancelled the contracts following public uproar but has not commented on Mr Moyo’s arrest.

He is the second minister in Emmerson Mnangagwa’s government to face corruption charges. Visit our live blog for the latest updates: Coronavirus news live Drax Consult’s Zimbabwean representative, Delish Nguwaya, and some top officials of the national drugs procurement agency are already facing criminal charges related to the scandal.

Moyo is facing allegations of illegally awarding a multi- million dollar contract for COVID-19 testing kits, drugs and personal protective equipment to a shadowy company (Picture: AP) Nguwaya is accused of lying in saying the company was a drugs manufacturing company based in Switzerland, ‘whereas it was merely a consulting company with no experience in the manufacture of drug and medical products’, according to the charge sheet. His arrest came after questions were raised on social media about how the controversial business man, who had failed a vetting process months earlier, had managed to set up a new company and secure millions of dollars’ worth of contracts to supply medicines and equipment – some at hugely inflated prices.

One of the President’s sons was forced to issue a statement denying a link to the company after pictures emerged of Nguwaya with Mnangagwa and his family at several events. The opposition has also expressed concern about a $2 million (£1.62) payment to Drax Consult, which was was flagged as suspicious by Hungarian authorities in March. The case comes as health professionals, including nurses and doctors, are on strike demanding to be paid their salaries in US dollars.

They argue that inflation that is now above 750% and the erosion of the value of the local currency have rendered incomes worthless. The health professionals have also complained about lack of adequate protective gear as the number of coronavirus cases rises. Zimbabwe says it has confirmed nearly 500 virus cases, including four deaths, but the actual number of cases is thought to be higher. The country is also facing its worst economic crisis in more than a decade and there is mounting public anger over poor services and corruption.