Moon's visit to Egypt, which will last until Jan 21, is part of his regional tour that also includes the United Arab Emirates and Saudi Arabia. 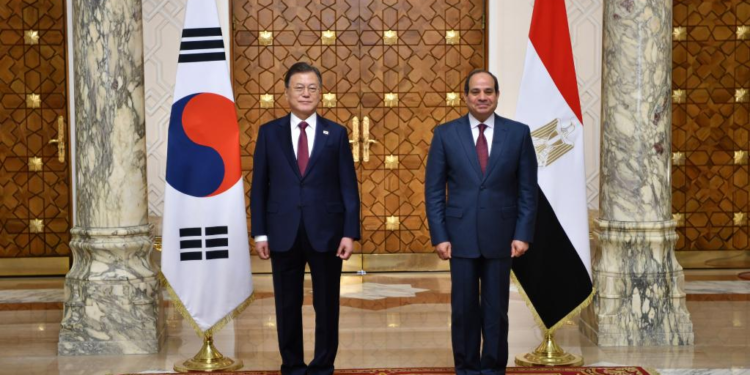 CAIRO – Egyptian President Abdel-Fattah al-Sisi and his visiting South Korean counterpart Moon Jae-in agreed on Thursday on the importance of boosting joint cooperation to support Egypt’s vision, the Presidency office of Egypt said in a statement.

This is the first visit by a South Korean president in 16 years, according to Bassam Rady, spokesperson of the Egypt’s presidency.

“This visit comes within the framework of our mutual interest in consulting and exchanging views on various topics and issues of common interest, as well as working to strengthen relations of cooperation between Egypt and South Korea,” Sisi said.

The two leaders witnessed the ceremony of signing several memoranda of understanding, including a one-billion U.S. dollar deal on financial cooperation from 2022 to 2026 between the two countries, and a 251-million-dollar loan by South Korea to upgrade the Luxor-High Dam railway line.

Egypt seeks to attract South Korean companies and investments in major development projects and infrastructure projects, as well as in the fields of energy, mining, transportation, communications, and information technology, according to the statement.

They also exchanged views on regional and international issues of mutual interest.

For his part, Moon hailed the Egyptian role as a cornerstone in safeguarding the security and stability in the Middle East and Africa by reaching political settlements for the regional crises.

He also touched upon Egypt’s efforts in combating terrorism and extremist thoughts, as well as prevailing the values of co-existence and tolerance in the region.