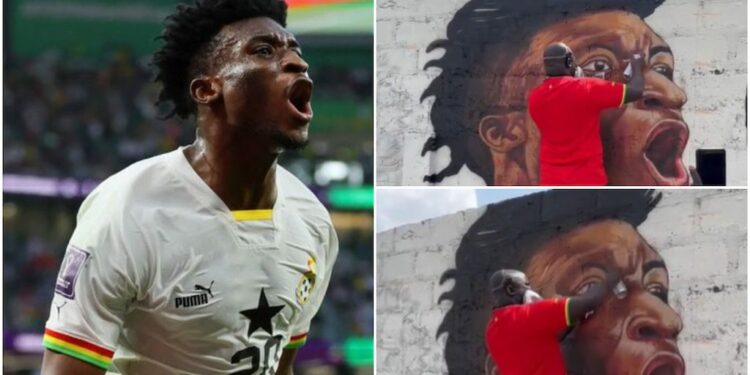 Mohammed Kudus’ outstanding performance for Ghana at the 2022 FIFA World Cup has not gone unnoticed. Kudus has so far three goal involvements for the Black Stars in the competition, notching two goals and providing an assist in addition to winning a man-of-the-match award against South Korea.

His performance has earned him praises across board, with his impact on the pitch not going unnoticed by many top European clubs.

A mural of @AFCAjax star @KudusMohammedGH going up in Nima of him celebrating one of this #FIFAWorldCup goals. The artiste, Moh Awudu says he wants it to be reminder to youngster in the community to that they can take on the world with dedication. https://t.co/z5uZGGdGra pic.twitter.com/B4qCZPp3rg

According to the artist, Mohammed Awudu, he wants the mural to be a reminder to youngsters in the community of Nima that they can take on the world with dedication.

For his club, Ajax Amsterdam, Kudus has also been in red-hot form. The attacking midfielder has scored 10 goals in 21 matches in all competitions and also posting man-of-the-match displays week after week. It won´t be a suprise come January if European clubs begin to circle Kudus ahead of a potential summer move.