Masai Mara National Reserve is one of Africa's Greatest Wildlife Reserves and it is one of the best known and most popular reserves. 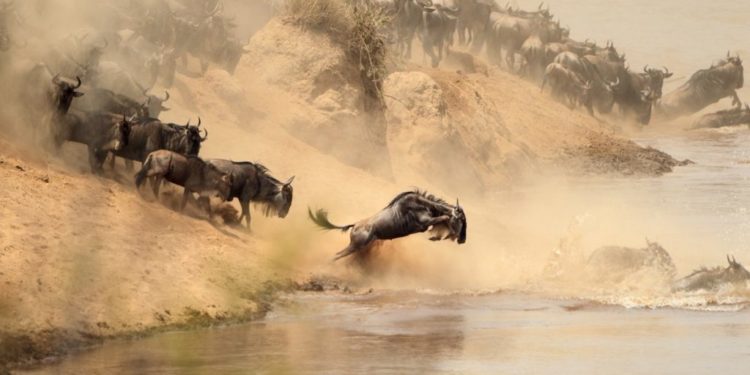 Along with Tanzania’s Serengeti National Park (with which it shares an unfenced border) the Masai Mara in Kenya is often considered to be Africa’s premier safari destination. Established in 1961, it protects a multitude of animals including the Big Five; and welcomes the herds of the annual Great Migration every year from July to November. The park’s name conjures up a hundred iconic images: a cheetah and cubs scanning the plains from the top of a sunlit termite mound, perhaps, or scores of wildebeest and zebra leaping into the crocodile-infested waters of the Mara River. To make your own Masai Mara memories, plan a trip using the guide below.

The Masai Mara is a relatively small reserve, covering an area of approximately 580 square miles in southwest Kenya. Its southern boundary marks the Kenya-Tanzania border and the beginning of the Serengeti; while the remaining boundaries are adjoined by private conservancies. These conservancies are owned by tribal communities and managed by eco-tourism operators, and share unfenced borders with the national reserve. The remote western section of the reserve, known as the Mara Triangle, is also managed as a non-profit conservancy run by the local Maasai. It is considered one of the best areas for game-viewing.

The Masai Mara is intersected by three major rivers: the Sand, the Talek, and the Mara. The Mara River is famous for the dramatic spectacle of thousands of wildebeest and zebra attempting to cross as part of their annual migration. The riverbanks are densely lined with trees and shrubs; otherwise, the primary habitat of the Masai Mara is open grassland studded with acacia thickets. Use this helpful map to orient yourself when choosing which part of the reserve to visit.

One of the reasons why the Masai Mara is so famous is that despite its small size, it’s home to an astonishing concentration of animal and birdlife. Sightings of the Big Five (lion, leopard, elephant, buffalo, and rhino) are almost guaranteed, while cheetah and smaller felines also abound. Keep an eye out for elusive predators including bat-eared foxes and spotted hyenas; and a slew of antelope ranging from topi and eland to oribi, waterbuck, and gazelle. The park’s rivers are home to hippos and crocodiles, while birders can look for more than 450 recorded avian species.

Between July and November every year, more than 1.5 million animals (mostly wildebeest and zebra) arrive in the Masai Mara as part of their annual migration from the plains of the Serengeti. Predicting exactly when and where the herds are going to show up is difficult as their movements depend on seasonal rains and grazing; but if you can observe them on the move, it’s a safari experience you will never forget.

Top Things to Do

Traditional guided game drives in an open-sided safari vehicle are the most popular activity in the Masai Mara. Most camps and lodges within the main reserve offer two daily excursions at the best times for wildlife viewing, i.e. early morning and late afternoon. Night drives are not allowed in the Masai Mara itself, but are permitted in the neighboring conservancies.

There are many operators who offer day trips or entire itineraries dedicated to one specific activity. These include birdwatching safaris, photographic safaris, and safaris devoted to being in the right place at the right time to watch the migration herds cross the Mara River. If you stay on a conservancy, you may also have the option to go game viewing on foot or horseback.

If you have room in your budget, a dawn hot air balloon flight over the Masai Mara deserves a space at the top of your bucket list. The unique aerial perspective allows you to see for miles across the reserve’s vast plains, and to observe wildlife as it passes undisturbed beneath the basket. Flights with Governors’ Balloon Safaris include a Champagne breakfast.

Many safari packages and itineraries include a visit to a traditional Maasai village. Sometimes these experiences are less than authentic, but if you’re lucky, you will be given a memorable insight into the lives of Kenya’s best-known pastoralist tribe. They are famous for their colorful traditional dress and their incredible prowess as warriors and herdsmen.

There are plenty of accommodation options located in and around the Masai Mara. Most are luxurious, and range from permanent lodges to tented and mobile camps. Before choosing which property to stay at, decide which area of the reserve you want to be based in. The central and eastern regions of the main reserve tend to see the most visitors because of their proximity to Nairobi. Lodges in these areas include Mara Simba Lodge and Keekorok Lodge.

The western Mara Triangle is more remote and harder to access, but typically offers more rewarding game viewing. There are only two options in this part of the park: Mara Serena Safari Lodge and Little Governor’s Camp. For the most exclusive safari experience and a wider variety of activities, opt to stay on one of the adjacent conservancies. Our top conservancy picks include Angama Mara, andBeyond Bateleur Camp, and Elephant Pepper Camp.

Weather & When to Go

The Masai Mara National Reserve has two distinct rainy seasons: the short rains (from December to January) and the long rains (from March to May). Due to Kenya’s proximity to the equator, temperatures are relatively consistent throughout the year, with average highs of around 86 degrees F and lows of around 68 degrees F. The long dry season (from June to November) is considered the best time to visit because it coincides with the Great Migration, and because animals congregate at water sources and are therefore easier to spot.

The reserve is located approximately 170 miles west of Nairobi, and although it is possible to drive there from the capital, the state of the roads makes the six-hour journey an arduous one. During the rainy season, roads may become impassable unless you have a 4×4 vehicle and experience with driving in poor conditions. For this reason, the majority of tourists choose to fly to the Masai Mara. There are several airstrips, including those at Kichwa Tembo and Mara Serena. Flights from Nairobi take approximately 45 minutes and depart from Wilson Airport; check domestic airline Safarilink for tickets and connections to other destinations.

Visitors to the Masai Mara National Reserve must pay a daily conservation fee. This is currently $80 for adults and $45 for children under 12 years of age.